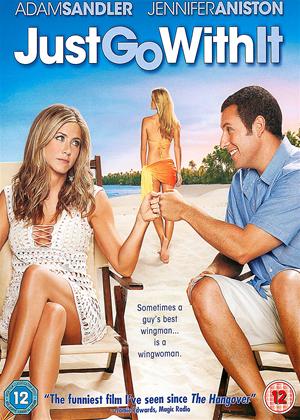 Reviews (2) of Just Go with It

I was swayed completely by the fact that this film had 5 stars. Mmmm, not worth 4 of them I can say. I am not normally one to write reviews online but felt that I had to, simply to set the record straight.

Sandler is well and truly off the boil and trying to relive the success of the wedding singer. Aniston is OK, but this is not the film for her. Decker is attractive and that adds a bit, but unfortunately not enough.

I have to admit to one belly laugh but nowhere near 5 star territory. Hopefully my single star will address the average and bring it all to the realms of reality.

The director and the script are off beam and the film is completely predictable. All in all, utter Guff.

Excellent! - Just Go with It review by CP Customer

A brilliantly funny film with a fantastic cast. Never a dull moment and thoroughly enjoyable to watch. Highly recommended!

Just Go with It review by Melissa Orcine - Cinema Paradiso

If a guy wants to get a girlfriend, he could just ask the girl out and be done with it, right? In the case of Danny Maccabee (Adam Sandler), a Beverly Hills plastic surgeon, he wants to hook up with a school teacher Palmer Dodge (‘Sports Illustrated’ supermodel Brooklyn Decker in her first movie), Danny tells her he is divorced with an ex-wife and two kids instead of his usual unhappily married man come-on.

Here lies the problem: Danny is just a single playa and in order for Palmer to totally buy his lie and stay with him forever, he asks the special participation of his assistant Katherine Murphy (Jennifer Aniston) and her real-life kids to be his pretend-family. Basically, what Danny wants is for Katherine, her kids, and a gaggle of friends to a trip to Hawaii to lie with him and ‘Just Go With It’.

Frequent Adam Sandler collaborator Dennis Dugan directed ‘Just Go With It’ (their last team-up was ‘Grown Ups’), and they’ve somehow perfected the formulaic comedy which stars a lovable schmuck who ends up with the girl. Not here. ‘Just Go With It’ is not an original story; it was based on the 1969 hit French farce ‘Cactus Flower’ starring Walter Matthau, Ingrid Bergman, and Goldie Hawn.

That’s no excuse, however. Even with the obvious chemistry between Adam Sandler and Jennifer Aniston, the laughs don’t actually keep on coming. You can tell that Aniston tries hard to spice it up but Sandler is just on the side cackling, and when the kids (Bailee Madison and Griffin Gluck) playing your pretend-children are way funnier than the leads you know it’s a sinking comedy ship. Brooklyn Decker is spot-on as a stunning school teacher but a total miscast to act the part.

Adam Sandler has not produced an all-out riot since 2007’s ‘You Don’t Mess With the Zohan’. He’s known for two things: adorable, funny guy-next-door (‘The Wedding Singer’, ’50 First Dates’) and the unabashedly rude frat guy (‘Billy Madison’, ‘Happy Gilmore’), and in ‘Just Go With It’, he wants to fuse the two to no avail.