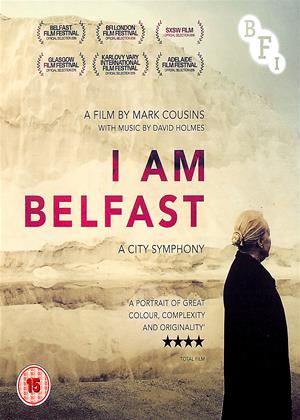 Reviews (2) of I Am Belfast

Unexpected - I Am Belfast review by EC

As a resident of Northern Ireland I was drawn to this film by its title. It wasn't at all what I expected but once I got used to the style I found it very interesting. The photography was particularly good.

Heavy handed - I Am Belfast review by RJ

I like Mark Cousins a lot as a film journalist but I don't really get him as a filmmaker in his own right. I like his documentary The Story of Film, but primarily because it is such a treasure trove of film clips - the bits in between, filmed by Cousins himself, always looked cheap and artless to me.

This film starts promisingly enough, with some beautifully shot landscapes (I presume it is cinematographer Christopher Doyle who is primarily responsible for these parts, but I do not know exactly how the collaboration between him and Cousins, who are co-credited for the cinematography, worked) and suitably atmospheric music from David Holmes. The middle section of the film, dealing largely with The Troubles, is also moderately interesting, albeit rather inconsistent in terms of style and tone.

Unfortunately, around the 60 minute mark, this film absolutely dives off a cliff and the final twenty minutes of the film consist of two heavy handed, badly shot sequences which strive for profundity but fall well short. The first involves a dreary 'fantasy' sequence showing the funeral of the imagined figure of the last bigot in Northern Ireland. The second uses the banal story of a bus driver turning his bus around so that one of his passengers can retrieve the shopping bags she left at the bus stop, in an attempt to illustrate the basic goodness of people. It felt so amateurish and sentimental, which confuses me because Cousins can be such an astute commentator on cinema as an art form, so it's something of a mystery to me how he can produce something so saccharine and crude.

Not for me - nonetheless I am still eagerly awaiting Cousins' next epic documentary 'Women Make Film'.