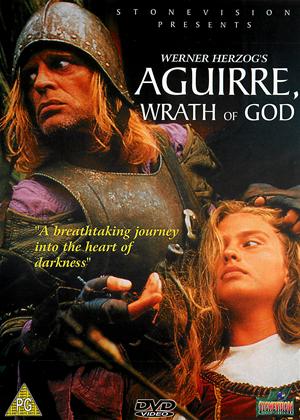 Reviews (4) of Aguirre, Wrath of God

If you want to see a raft full of monkeys... - Aguirre, Wrath of God review by Steve

Herzog masterpiece about Spanish conquistadors in South America feels truly real. The brilliant opening scene of a royal train in a mountain descent, captures the greed borne insanity, the cultural incongruence, and the misguided heroism of Empire. Benchmark deranged performance by Klaus Kinski.

Oh God, what a film - Aguirre, Wrath of God review by PT

From the opening scene this film is brilliantly shot. Apparently shot on a low budget, which is all the more remarkable. Klaus Kinski is brilliant in the lead, an insane megalomaniac, who is so convincing lunging around like some kind of leering hunchback. The direction by Herzog is equally impressive, giving the film a dark feeling of one mans obsession with power and riches. For film buffs this is a must see.

The masterly direction of Herzog and the terrifying portrayal by Kinski create a powerful allegory on the shameful history of colonialism and its attendant racism together with the all too familiar danger of a megalomaniac managing to cast himself into a position of power. The film was made in the 70s and presumably Herzog had in mind Nazism and Hitler. Chillingly, however, the theme of the movie strikes me as being just as powerful in 2016 and one doesn't have to look too far for the allegorical representation. Aguirre, has a maniacal obsession to create a 'new world order'. He summarily disposes of his main opponent using a made-up quasi judicial process and continues by leading a hopeless band of passive followers up a jungle river to an inevitable conclusion. Kinski's portrayal of Aguirre is, as I have said, terrifying; every move and gesture that he makes has chilling menace.

A movie just as significant today as when it was made. A warning for our times.

The documentary ‘My Best Fiend’, in which acclaimed German Director Werner Herzog discusses his love/hate relationship with actor Klaus Kinski (with whom he made five films), explores the complicated balance between genius and someone whose mood-swings makes him virtually unemployable.

‘Aguirre’ was the first collaboration between the two men, with Herzog initially hoping to instill the character of Lope de Aguirre with the kind of genuine manic behaviour he had previously witnessed from Kinski. To say the resultant shoot proved to be fraught is an understatement. And yet, to some extent, the gamble paid off, with Kinski giving a tremendous powerhouse performance. To my mind, however, even this was somewhat overshadowed by the punishing conditions and Amazonian surroundings the characters go through.

In front of the camera, the story tells of the travels of Spanish soldier Aguirre, who leads a group of conquistadores down the Amazon River in South America in search of the legendary city of gold, El Dorado. Behind the camera, Kinski’s tantrums terrorized the crew and local natives who were assisting the production. It is difficult to know which is more fascinating, but there’s no doubt that ‘Aguirre’ is an uncompromising and bleak journey into madness and mistrust.

The music comes from West German band Popol Vuh – an excellent soundtrack which conveys both the majesty and unforgiving qualities of the environment. Additional music comes from the persistent native gentleman who doesn’t let the conditions put him off playing a selection of panpipe pieces that lighten and irritate with equal measure.

As you may expect, the journey doesn’t end well for anyone, but the final image of Aguirre alone and still battling to survive, is a strong one. You have to be in the mood for this, but there is no doubt is a very grim and powerful piece of cinema. My score is 7 out of 10.