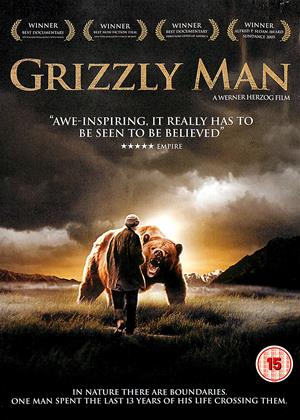 Synopsis:
Grizzly Man is Werner Herzog's breathtaking feature documentary which combines his own work with original footage by Timothy Treadwell, the intrepid bear expert who for thirteen summers risked his life living with Grizzly Bears in Alaska, until eventually he got killed by one of the bears he sought to protect. Whilst Treadwell perhaps paid the inevitable price for his work, the one hundred hours of footage he shot over this period is among the most incredible, stunning and moving ever committed to film. Grizzly Man is a modern day masterpiece which uncovers as much about human nature as it does the bears Treadwell set out to study.
Actors:
Timothy Treadwell, Amie Huguenard, Carol Dexter, Val Dexter, Sam Egli, Franc G. Fallico, Willy Fulton, Marc Gaede, Marnie Gaede, Sven Haakanson Jr., David Letterman, Jewel Palovak, Kathleen Parker, Warren Queeney, Larry Van Daele
Directors:
Werner Herzog
Voiced By:
Werner Herzog
Narrated By:
Werner Herzog
Writers:
Werner Herzog
Studio:
Revolver
Genres:
Documentary, Special Interest
Awards:

What is it about bears? - Grizzly Man review by CP Customer

I really ask why some men believe they can co-exist with grizzly bears or confront them and come off equal. Timothy certainly had a passion about the species and used that to his benefit. Herzog as a director investigating Timothy tries to be impartial but clearly raises some questions that need addressed. Timothy's love for the animals is never in doubt but his failings as a member in our society is debated. Using Timothy's own footage gives a personal and intimate insight into the man, almost as if he was working alongside the director. The final dramatic closing moments are handled with care and I'm glad that this was left off camera. Overall Grizzly Man is an insight, albeit a tragic one, into Timothy rather than the bears he protected.

Herzog, and the extremes of human life. - Grizzly Man review by Steve

Herzog investigates the life of Timothy Treadwell, a conflicted loner who had spun some minor celebrity out of his close cohabitation with grizzly bears in Alaska; and he and his girlfriend's death by them. A story of two obsessives, Treadwell and the dry, inquisitive Herzog, with a brilliant narration from the director.

It Made me Grizzly, Man!!! - Grizzly Man review by CP Customer

Having really high expectations for a movie is always a bad thing, the big summer blockbusters that have promised so much and then failed to deliver.The same could be said for this movie, the reviews have been good the premise looked promising but when I watched it. What a drag. Yes treadwell is a sort of interesting character but the only reason he made the films and died at the end was to gain the notoriety that he had so craved in the real world and not achieved. For me this movie came across as a very long suicide note from a lost soul.Far to much filler.

I Watched 'Grizzly Man' Two Days ago (16/02/07). I was surprised at my like, dislike, anger, respect, fondness and pity for the late Timothy Treadwell. A very odd man, who's beliefs represent a lot of my own, yet, his way of going about things was very curious and boardering on quite worrying in parts! Gorgeous scenes of the bears and foxes, nature and the elements are perhaps the only thing this documentary stands out for. Surprisingly enough, the lovely scenes overshadow the 'star' Timothy Treadwell. A morbid part of me was very disappointed at the fact that the audio recording of the fatal bear attack, was not played to us, the audience. Also, the hints were there that, perhaps, the autopsy/attack photos would be shown, but it is all left to the viewers imagination. Being rated a 15 certificate, I was expecting to be blown away by the severity of the attack etc. Maybe, that is very wrong, but shock tactics are something a lot of documentary makers use, so viewers are very used to graphic images now days. I just felt a little patronised at the 'hiding' and 'secretiveness' of the attack audio recording/photos. Also, it was VERY hard to distinguish the fact and fiction from each other! The friends/Family interviewed seemed, to me, like actors! Their movements, reactions and demeanours were those of second rate Actors at that. Very odd. Overall, a half decent documentary, masquerading as a gory tale of high drama and suspense. I was neither suspended or riveted. The animals are the stars and Treadwell has succeeded in capturing some amazing beautiful shots, showing nature and its connections and boundaries to humans.

I found Treadwell pretty cringeworthy to watch. Going off on odd rants and telling all the wildlife how much he loved them. He seemed overly fixated on the fact that the bears could kill him. It would be interesting enough as a 1 hour TV documentary but a little long winded at over 1 and a 1/2 hours.

I am forever intrigued by Herzog and the stories he chooses to tell, whether in documentary form or as a feature film. Ever since Aguire, Wrath of God, in the far distant past, through other collaborations with Klaus Kinski, and onto these more recent documentaries, he pursues his own distinct curiosity as to what motivates the individual to venture into worlds apart from the normal human experience.

Timothy Treadwell's quest brings to mind the heroic, but quite mad, Fitzcaraldo, intent on building an opera house in the jungle. Whilst Treadwell didn't actually need to haul a ship over the mountains, his determination to live with the grizzlies in Alaska, alone apart from his camera, filming himself alongside the bears, forever proclaiming how only he understood them and was fit to protect them, yet all the while telling us how dangerous were these animals and how he was risking his life in the pursuit of their protection. These films, shown back in the US when Alaska was in the grip of winter, gave him both celebrity and notoriety. Either way, he didn't seem to care. What he went to great pains to hide, though, was the fact that he was rarely alone but almost always had a girlfriend along. Obviously the bears could not provide all the companionship he needed. That what he predicted, that the bears would eventually kill him, came true. That his girlfriend died too was, of course, the bigger tragedy. I feel that the film could have stood more vigorous editing but all the same, Herzog makes a good job of combining Treadwell's film archive with his own to good effect.