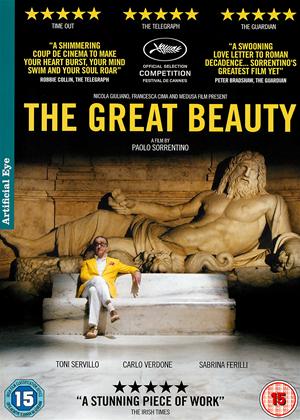 Reviews (11) of The Great Beauty

I was expecting good things from this film but how wrong I was. This is a a big steaming pile of pretentious twaddle. If you wanted to stop anyone from watching world cinema then just show them this. How it won an Oscar is beyond me.

We gave up on this one! - The Great Beauty review by BM

Sometimes films which are described boring or incomprehensible in reviews end up being the films we enjoy, but not this one. We lasted 50 minutes,,,,,

There are better easy of spending 2 1/2 hours!!

A film with a difference - The Great Beauty review by BE

No story as such but a presentation of ageing Italians who appear to be living in an unchallenging void, clinging on to the edge of life. They mask the inevitable by living an hedonistic and shallow lifestyle. Nonetheless, I was enthralled throughout. Tony Servillo brilliantly took the lead role, the settings were beguiling along with some really beautiful scenery. It is excellently crafted. My only criticism is the subtitles which at times were so fast and furious, I had to backtrack to fully read them.

First there are a lot of 1 and 2 star reviews here that say the film has no plot, is long, slow, arty, pretentious etc. They are not wrong and if long, slow, arty and a bit pretentious is not your thing then this film isn't going to float your boat at all.

However if that sort of thing doesn't bother you then I recommend this wholeheartedly. The film follows the life of a rich art set in Rome. It shows them leading their pointless self-indulgent lives and being generally arty and pretentious; it makes a pretty scathing indictment of their hollow lives. The twist is that it does this with such adoring and sumptuous cinematography that I was left wondering of this really is a biting satire or a homage to the life. Perhaps it is a bit of both. In some ways the film itself is living the arty and pretentious life whilst mercilessly satirising itself at the same time. The leading character lives this way too.

I certainly didn't find the film boring, in fact I was engrossed the whole way through. I also found it funny, the absurd situations and some of the characters' biting comments had me laughing out loud in places. Definitely recommended.

Sumptuous art film, dense with wit and visual imagination. I'm not a big Fellini enthusiast, who this film repeatedly references, but that was no impediment to liking this film, one of my favourite of the century. An Italian state-of-the-nation film whose bitter world view works for anywhere in the west. Be sure to watch the beautiful, poignant closing credits.

This movie is way overlong and also self-indulgent - that makes it really boring in places. It takes ages to get going - the plot point being in the 35th minute. Why? Because we have stupid dancing scenes for ages before that.

To be fair, there is no plot really. It just washes over you - but no amount of arty cinematography can eliminate the boredom felt by many a viewer at the self-indulgent waffle here (and it's co-produced by a French company, so know what to expect - long gazes, confusing flashback editing).

I also feel the director's back catalogue and reputation has created a case of the Emperor's New Clothes amongst some adoring reviewers.

Some great characters though, esp the dwarf. Plus some genuinely laugh-out-loud lines. But a film has to be more than that. If I or you had written this script and sent it to the BBC or other production companies, it wouldn't have got a full read - 5 pages in, it would be on the REJECT pile.

For me, the final act - the last 25 minutes or so - was the best. Though the 104 year old nun character seems dropped in as a means to finish an amorphous and nebulous mess of a movie.

Alternately boring and riveting - The Great Beauty review by Alphaville

The spirit of Fellini lives on. An ageing one-book author contemplates his life. There’s no drama and precious little narrative. Long scenes of talking heads are ponderous and pretentious, all voiced in monotone (was this film post-dubbed in a booth?). It’s the sort of wordy borefest that gives ‘arthouse’ cinema a bad name.

Yet the boring scenes are interspersed with ravishing camerawork by director Paolo Sorrentino. Some of the tracking shots are mesmerising, especially the pre-title sequence, where a magnificent rooftop shindig seems to go on forever as the camera prowls around it. If only. Once the talking heads start you’ll be fast-forwarding to the next bit of cinematic bravado. The trailer gives some idea of both the beauty and the boredom and for once gives no plot points away… because there are none to give away. Not as great a film as arthouse critics would have it, but well worth dipping into.

I lasted 15 minutes - The Great Beauty review by AJ

Congratulations to the viewers who lasted longer than that. But it doesn't look like there was much worth waiting for.

Sooo boring and pointless - The Great Beauty review by rh

At first I thought the script had been lost because this is just overlong scenes of dancing and parties. I just could not find a plot or point to the film. Like other reviewers I found it boring

One to savour - The Great Beauty review by Promessi

A classy and stylish piece. Intelligent and visually sumptuous. If one judges this by the very highest criteria then you have to note that it is Fellini pastiche with none of the challenges that the great man makes of his audience. The single message seems to be that the lives of the Milan super rich are superficial and ultimately sterile. Well maybe. But the delivery of this idea is managed with such exquisite filming and such brilliant visual tableaux that I can't get mad at it for long. Just go with it and enjoy each moment , but don't expect any life-changing insight into the soul of mankind.

Don't waste your time - The Great Beauty review by PR

Previous reviewers have said it all: this a pretentious and patchy film which never quite gels together . Tries to be shocking, but ends up saying more about some countries' immature attitudes to sex and success than about the human condition. Even the choice of music is embarrassing (seems they have just discovered Tavener, Preisner and Gorecki 10 years after everyone else did) . Its only redeeming feature are the beautiful shots of the city of Rome - I detect a sincere love for the place there. But as for the rest…. come back, Fellini, we miss you!

Before I watched The Great Beauty I had already been told it would be a love it or hate it film and while I didn’t love it, I can’t say I hated it either. Sure the film is unbearably long at 140 minutes and there are scenes that contain nothing but ridiculous dancing but it’s also incredibly profound, shot in a new and interesting way and filled with enough philosophical thought to last a lifetime.

When Jep (Toni Servillo) learns of a past loves untimely death he enters a mode of reflection as he looks back on his life while learning to appreciate the things he has in the present that ground him. While he struggles with his grief he also helps others find their path as he tries to find something to write about as part of his long gestating second book, one he is adamant he doesn’t want to write.

As Jep strolls the city, takes in the sights and sounds and the beauty of the place we start to understand how little he really knows about real beauty, something he has unwittedly been looking for all his life. He lectures people about what they should be experiencing but he doesn’t understand it really. Servillo portrays this perfectly as Jep’s barriers begin to collapse around him and his rules begin to be nothing more than guidelines.

The fluid direction as shots flow into one another proves not only unusual but relevatory as every sequence is given a more effervescent and lively atmosphere with a hint of mystery thrown in for good measure. The film doesn’t pretend to understand The Great Beauty it is trying to show but it gets that we all see it in a different way so director Paulo Sorrentino ensures we never see any unnecessary shots.

That being said the film is full of moments that contain subtle elements but never really add to the big picture, you can enjoy them on their own but can’t appreciate the full package. Jep seems to have that problem as well which either makes this picture surprisingly ironic or powerfully expressive.

Unlike any film you will see this year, The Great Beauty is quintessentially Italian as it uses art, life and love to reaffirm and depress us at the same time