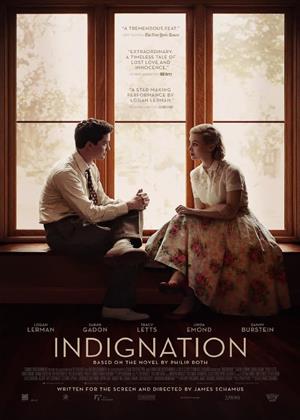 First time director James Schamus helms Indignation, a highly intelligent film about life in 1950s USA where conservative social bearings are the norm. To this extent, Indignation works astoundingly well and extrapolates the most important bits out of New Jersey’s era at the time, while also putting things we take for granted nowadays in true, undeniable historical perspective. So, needless to say – Indignation features a great story (based on a novel by Philip Roth), great acting and a cinematography that will leave anyone loving the medium – breathless.

Indignation starts with Marcus Messner (amazingly portrayed by Logan Lerman), who is the first out of his family to attend college. However, his parents Max and Esther (played by Danny Burstein and Linda Emond) respectively are pressing hard for Marcus to participate in the, at the time ongoing Korean War. Despite their efforts, Marcus enrolls in the fictitious Winesburg College in Ohio thinking his young adulthood problems have instantaneously been solved. Little did he knew he was only standing at the doorstep of an unimaginable introspective crisis to follow.

Afterwards, Marcus is destitute at refusing to accept the Jewish formalities and norms as he goes on to have a date with a mysterious blonde woman named Olivia (Sarah Gadon) who seems to hold more questions than what meets the eye. Marcus’ puritan demeanor is quickly thrown off the rails after Olivia indulges in sexual activities with him that he deemed unacceptable at the time. Dazed and confused, Marcus returns to his dorm room where he finds out his Jewish roommates are not so fond of him after all. So, his only choice is to seek shelter elsewhere, by venturing out all on his own.

The previous action piques the interest of the head of college Dean Caudwell (Tracy Letts), after which Marcus is called to his office in a hurry. What follows is a clash of conservatism as seen by the Dean and thought free of oppression as carried out by the brilliant Marcus through words alone. After a barrage of invasive questions in order to penetrate Marcus’ defense, the Dean then turns to verbal attacks as last means of resort. Marcus’ father Max is also brought to the equation, as Dean Caudwell insists to know why he is listed only as “butcher” instead of “kosher butcher”. Then he proceeds to graze the religious surface as Marcus carefully and voluptuously reflects the questions back at his verbal tormentor. After one of the smartest verbal sparring in history of modern cinema, and an infamous physical end to Marcus’ intelligent comebacks - they both go on their own separate ways.

Indignation is a slow thriller that creeps under one’s skin until it resurfaces in a glorious fashion along with the memories and messages it dearly holds. A fresh and nuanced take on conformity and conservatism that is almost as relevant now as it was back in the day.