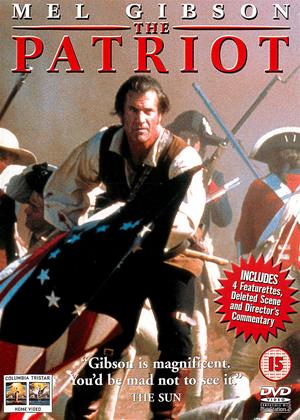 Synopsis:
As a former war hero of the French and Indian War, Benjamin Martin (Mel Gibson) is determined to renounce his notoriously violent past in order to raise his family in peace. The last thing he wants to do is return to battle against the savage British redcoats in the midst of the American Revolution. But when one of his sons is killed in a revolutionary skirmish and his patriotic eldest son Gabriel (Heath Ledger) joins the fight, Martin has no choice but to take up arms once again in order to protect the people he treasures most in his life. The only way to protect his family is to face the bloody reality of war and fight for a young nation's freedom.
Actors:
Mel Gibson, Heath Ledger, Joely Richardson, Jason Isaacs, Chris Cooper, Tchéky Karyo, Rene Auberjonois, Lisa Brenner, Tom Wilkinson, Donal Logue, Leon Rippy, Adam Baldwin, Jay Arlen Jones, Joey D. Vieira, Gregory Smith, Mika Boorem, Skye McCole Bartusiak, Trevor Morgan, Bryan Chafin, Logan Lerman
Directors:
Roland Emmerich
Producers:
Dean Devlin, Mark R. Gordon, Gary Levinsohn
Writers:
Robert Rodat
Others:
Caleb Deschanel, John Williams, Greg P. Russell, Lee Orloff, Kevin O?Connell
Studio:
Columbia Tristar
Genres:
Action & Adventure, Classics, Drama

Reviews (2) of The Patriot

A must for an American - The Patriot review by JD

This is the American Revolution most definitely seen from the point of a nostalgic American. The English are the baddies and some of the English tactics are blood curdling. The fine upstanding Americans come from desperate underdog to supreme superheroes. If you can swallow your pride for a moment however it is a brilliant war film. The attention to detail particularly costume and culture is amazing, the acting superb, the warfare fantastic.

During the American Revolution (1776), Benjamin Martin, a veteran of the French & Indian War and a widower with 7 children, is called to Charleston to vote in the South Carolina General Assembly on the matter of a levy supporting the (American) Continental Army. Initially opposed to war against the British, B Martin is soon drawn into the fight. He helps set up a South Carolina militia force that goes on to attack British forces across the region.

This is very much an American movie glorifying the fight for independence of the Americans and the British forces are portrayed as very brutal and inexcusably violent in the way they tackle the Colonials' rebellion against the Crown. (The article on the film, in Wikipedia, has a section devoted to historical exaggerations and inaccuracies.) The role of slavery is glossed over in the film: relations between (American) Whites and Blacks are presented as generally harmonious and good. (We all know that the American Revolution in no way put an end to slavery: this came about 100 years later, in the aftermath of the American Civil War.)

Having said that, it is still an excellent film and the battle scenes will take your breath away. If you are interested in history and the history of warfare, it will be a plus, but, whichever way, it is a great spectacle and the film is very well-made. I thoroughly recommend it.

My only reservation would be that it is slightly overlong at 2 hrs 40 mins. It would appear that film critics, overall, did not particularly like the film when it came out: this is unjustified in my view. It is a very good film, well acted too.