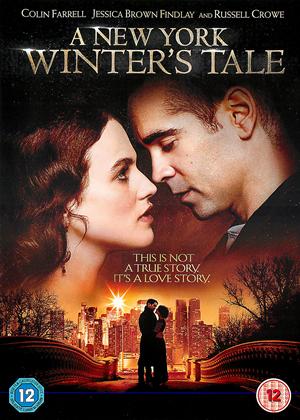 Rent other films like A New York Winter's Tale

Much like the book of the same name by author Mark Helprin, Winter’s Tale is not your conventional love story. It isn’t even really a film about love at all but the forces in this world that keep the world in check, be it the good in people or the bad. These forces find themselves conspiring in ways we wouldn’t expect, often to the best results.

The film follows Peter Lake (Colin Farrell), an expert thief who finds himself running from his so called mentor Pearly (Russell Crowe). However when he meets Beverly (Jessica Brown Findlay) on his way out of town he finds himself a reason to put himself in harms way. However Peter doesn’t realize there are dark forces conspiring against him and that the world he lives in isn’t normal, it’s a place of angels and demons.

The valentines day release and the endless sappy trailers do try to paint a certain picture but even though most of the film is devoted to the relationship between Beverly and Peter, it doesn’t feel like the driving force, it feels like a way of showing the inherent optimism and perseverance of man in front of impressive odds.

The addition of the supernatural to the story proves hit and miss as it creates a grand idea of the importance of Peter’s life and the task he has been presented but it also takes away from a very real, naturalistic story of love and compassion that feels ever so slightly cheapened by the mystical. The addition of a cameo by Will Smith as a supernatural judge in charge of maintaining balance is interesting and shows Smith in a decent way after the After Earth debacle but it adds little to the story.

In the end the film is akin to Cloud Atlas, a tale about how our lives prove important for unknown reasons, reasons we might not understand but play into none the less. Peter Lake’s life is vast and tragic but in the end it feels like you have watched something important happen even if you might feel a little lost