Rent Teenage Mutant Ninja Turtles: Out of the Shadows (2016) 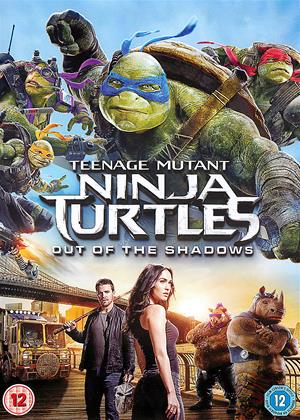 Rent other films like Teenage Mutant Ninja Turtles: Out of the Shadows

Reviews (2) of Teenage Mutant Ninja Turtles: Out of the Shadows

Terrapins from the toilet - Teenage Mutant Ninja Turtles: Out of the Shadows review by NC

They did say people flushed terrapins and alligators down the toilets in New York, and they grew in the sewers! Not sure if kids film, more like a super-heroes with ridiculous abilities genre, but not as clever as Deadpool, or as dark as Batman.

Not as good as the one before this - Teenage Mutant Ninja Turtles: Out of the Shadows review by gazmb

I thought the first one wasn't too bad but for meeting this second one isn't very good . Seemed to be made to silly and focusing laughs . Could of been so much better.

After the first live-action Teenage Mutant Ninja Turtles movie of 1990, there was much discussion in the schoolyard about who would be the villain for the sequel. Logically, based on the cartoon series, the interdimensional alien being Krang was assumed given how Shredder worked for this antagonist. Alas, Shredder merely returned once more aided by mutant creatures Tokar and Razar, characters that many of my classmates dubbed the poor-man’s Bebop and Rocksteady (more characters from the cartoon). Perhaps technology just wasn’t ready to render such figures for the big screen. An animatronic Krang with a miniature model of his giant Technodrome vehicle would probably not be able to do much.

But now computer technology has advanced to a point where anything can share the screen with live action. Now it’s possible to have the likes of Krang, Bebop, Rocksteady and the Technodrome appear seamlessly against live-action actors. As with any technology, however, the big question still needs to be answered: Should it be made? Is there enough story and character to warrant devoting a special effects budget to creating a talking brain, an anthropomorphic rhino and warthog, and a giant dome that shoots lasers? Such questions are not answered in the age of rampant computer-animated blockbusters.

It’s rather frustrating in that my biggest qualm with the previous CGI Teenage Mutant Ninja Turtles, there wasn’t enough for these fully designed Turtles to do, is still an issue. The 2014 movie had an impressive chase down a snowy hill and some decent back-and-forth between four heroes, but the storyline they were trapped within, that of stopping a mutant gas from infecting New York City, was so unoriginal in how it essentially steals the plot of The Amazing Spider-man. This sequel offers an even more unoriginal story, this time thieving more from Transformers. Krang, a talking brain-like being requiring a robot to transport him around, wants to come to our dimension and take over our planet, but requires Shredder to help him travel through a portal. To open this portal, Shredder needs to collect a handful of devices scattered across the globe. The Turtles try to stop him; they fail and end up fighting Krang to stop his Technodrome from destroying New York City. Does that even count as a spoiler?

But is there anything for our heroes of the Turtles to do besides go treasure hunting? Surprisingly, there are a few interesting aspects presented, but few of them are explored thoroughly. The Turtles are still trying to handle remaining in the shadows, allowing the cocky reporter played by Will Arnett to take all the glory. This desire to be socially accepted sparks an interest in wanting to be human when mysterious ooze they discover holds the key to switching races. This unique prospect is mostly boiled down to trust between the Turtles, becoming less important if they can change themselves and more important if they learn teamwork. Their interaction with the police department that deem them as monsters also holds some questioning of what to believe and who to trust, but the cops appear to quickly setup a Batman-style contract without much discussion towards the end of the movie.

Meanwhile, the evil scientist Baxter Stockman (Tyler Perry) only fulfills his duties as a standard nerdy loon to bring about Bebop and Rocksteady, leaving the stage when his use has expired. Every Turtles fan was waiting for the moment when he turns into a mutant fly from the cartoon, but such a transformation is shelved for a future movie. Reporter April O’Neal (Megan Fox) has even less to do this time around, acting as the Turtles’ eyes and ears in addition to being the movie’s boobs and butts. She’s at least thrown a less dopey human character to interact with, the cop-gone-rogue Casey Jones (Stephen Amell), but he still makes the Turtles appear as geniuses in comparison. Casey appears to be a competent enough cop, but turns into the most doltish of idiots when confronted by the Turtles who manage to convince him into attacking their master Splinter. The Turtles voice actors are all still fine performances, but they I can’t help but feel we still need more time to get to know them past the pizza scarfing and goofy ribbing.

While these characters and storylines come and go, there are some decent action sequences, but they appear so bloated with CGI antics it begs another question: Why not just make this movie a cartoon? There’s an extended sequence where the Turtles infiltrate a cargo plane where Bebop and Rocksteady ambush them. With all the human characters tossed out of the vehicle, the movie can proceed with a scene where CGI characters battle on a CGI plane, allowing for far more slapstick. And the final sequence of them assaulting Krang on an assembling Technodrome adds little thrills with sliding powers and tensionless action. Once again, we never get to learn much more about the Turtles or enjoy their teenager comradery. The expensively campy classic of 1990 is practically a character study by comparison.

Teenage Mutant Ninja Turtles: Out of the Shadows is a nostalgic pastiche that fulfills a checklist of Turtles fan wishes, but reminds one of being careful what they wish for. There are several elements present in this movie that I wanted to see on the big screen as a kid, including my favorite Turtles toy of the Turtle Van that could shoot pizzas and manhole covers at bad guys. It was not until I grew up did I realize these scenes were more thrilling in my imagination than they would ever be when stitched together with a big budget and a forgettable script. I can only hope today’s kids have more of a stimulating imagination with the new Turtles toys than these filmmakers had with such a property. Writing as a Turtles fan, I’m not feeling much of the Turtle Power.