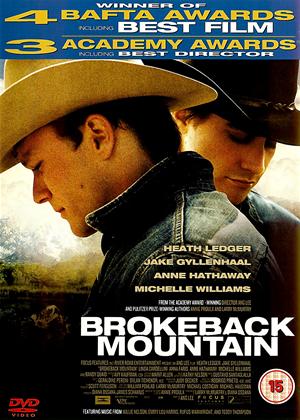 I loved this film, wasnt sure what to expect apart from the obvious gay angle. but what a surprise, the acting was brilliant, the emotions that it conveyed were so real and touching and it certainly stays with you. You could really empathise with these characters.

one to watch again.

Forget the "gay cowboy" tag, this is just a quality film. Stunning cinematography, score and script. Ledger is absolutely outstanding - I would never have expected a performance of such depth and nuance from him - and Gyllenhaal runs him close. If you are looking for an action movie, you will be disappointed. But if you want a drama that is thought provoking and emotionally gripping, watch this film. I challenge anyone not to have a little weep during it. Once you've seen the film, you won't stop thinking about it - and it doesn't matter whether you're gay or straight or anything else.

Forget the misleading ”Gay Cowboy Movie” label, if anything then it’s a Romeo & Romeo-story or as the tagline says “Love is a Force of Nature”. It’s one of the best movies for a decade and you feel the actors have figured that out too, since they all perform at their very best including the supporting roles e.g. Jack’s parents and the two wives. Of course, it’s Heath Ledger’s film playing a difficult character as the introvert and almost wordless Ennis, so he has to express himself using body language and facial expression as the tormented soul he plays. Fabulous acting!

Jake Gyllenhaal has it a little easier with his extrovert and lively character. For both of them it must be the best performance in their career so far.

Although it’s about homosexuality and the reaction from society, the film does not point finger or moralize, you can make up your own mind. A highly recommendable film one can watch more than once. Should you prefer a more upbeat movie with the same subject then ”Latter Days” is a good choice.

One of the most enthralling and emotional films I have seen in a good year. The story is realistic, the cinematography is stunning and the acting is superb. You really feel how they feel about being homosexual in a time where it was visibly wrong as well as emotionally. Its a fantastic film, get over any homophobia you may have and enjoy.

The two leads are certainly fantastic actors and very convincing in their roles. The sweeping landscapes are spectacular and shot beautifully. It is a fairly uncomfortable film to watch though. The gay sex scenes are quite graphic.

what a load of hipe - Brokeback Mountain review by CP Customer

now all the hype one has to think,theres got to be something about it,,

if this was a girl/boy movie it would have bombed at the box office,never to se the light of day,the sceneray is noce, the photography is good, the acting,ok, the story,very week, comes from a short story,,should have been keept short too,

it was rubbish ,sorry to say,

how anyone can say they where seriusly involved leaves me at a loss,

This is one of the most realistic and honest films to portray true life for gay people that I have ever seen. The subject matter is dealt with in a warm, understanding and sympathetic way, that shows the true heartache and prejudices that gay people have to suffer. Two real men who just happen to love each other, torn apart by societies prejudices and pressures to conform to a world which is not theirs. Set in the 70's, the themes explored are as true and relevant today as they ever were. I personally cannot stand gay men being portrayed as camp effeminate things, because most of them simply are as straight as the next bloke! I'm not into girly movies or camp humour and this is neither, it is a real bloke movie about love and I was very surprised at how well made, well directed and what superb acting performances are put in by all the actors. A real must see. If you have any kind of homophobic tendencies, then you need to see this film and then perhaps you will finally understand! I take my hat off to all those involved in the making of such a dramatic, well made and true to real life epic.

One of the all-time best films: unbearbly beautiful and sad - Brokeback Mountain review by KH

In the 15 years or so since I last watched this film, I had forgotten just how brilliant it was. Now watching it again with my 17-year-old son, I found it extraordinarily - almost unbearably - beautiful and sad. We were both in tears by the end...