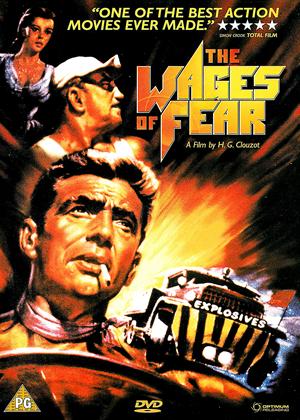 Reviews (4) of The Wages of Fear

Although this extraordinary film is over 60 years old and inevitably shows its age in places, its best scenes still pack a punch that modern thrillers can seldom match. Its basic premise works superbly because the heroes aren't up against a foe they can potentially kill or outwit. Their nemesis consists of two truckloads of a chemical that could explode with apocalyptic force at any moment for the most trivial of reasons, such as a small pothole in a road hundreds of miles long that only qualifies as a road because it isn't part of the surrounding jungle. They can't even run away from the danger because their entire job consists of deliberately staying close to it.

However, it only just barely qualifies as an action film. Henri Clouzot, the French Alfred Hitchcock, has the intelligence not to make the entire two-hour movie all about some men attempting to prevent a truckload of tins from going critical. The opening section, which may seem overlong and irrelevant at first, establishes the peculiar relationships between a group of European ne'er-do-wells who, for one reason or another, none of which are really explained, find themselves stuck in a dismal, disease-ridden fly-speck of a South American town which, if you can't afford the air-fare out, is so inescapable that it might as well be Hell.

Finding themselves at the bottom of the pecking-order and barely surviving at all, their attempts to salvage a few shreds of pride by jockeying for position amongst themselves like a pack of stray dogs allow the four main characters to relate to one another in complex ways that don't necessarily have anything to do with whether they like each other, and means that their decision to go on a near-as-dammit suicide mission has just as much, if not more to do with their desperate macho posturing than their stated motive of being paid the promised small fortune. It also means that, for the entire main part of the film during which their terrible journey takes place, they have to balance an equation much more complex than weighing their desire for money against their fear of death, and be more and more honest with themselves and each other as the tension wears them down.

Of course, the extent to which they're individually able to cope turns out to be inversely proportional to how much of their image as hard men depends on bluff and bluster, since no amount of Alpha Male posturing will impress a can of nitroglycerine. In a nice touch, out of all these extremely manly men, the one who shows by far the greatest courage is, as far as you can tell in a movie from an era when they were very coy indeed about openly referring to such things, probably gay.

This complexity of motive allows Clouzot to turn what could have been a simple tale of flawed heroes coping with a series of unfortunate events along the lines of "Armageddon" into a compelling character study of men so flawed they aren't heroes at all doing something insanely dangerous for reasons that are no better than they are. This means that, although the hazards they encounter along the way really are nail-bityingly tense, there aren't so many of these that the story degenerates into a painfully contrived obstacle course and becomes absurd. Most of their journey is uneventful and relatively safe. But of course the unrelenting, inescapable fear that if anything at all goes wrong they'll instantly be very dead indeed is gnawing away at their sanity.

This is terror pared down to its barest essentials, and Clouzot masterfully shows us what it does to the men in its grip. 24 years later, with a vast budget and special effects Clouzot couldn't have even dreamt of, William Friedkin remade it as the misleadingly-named "Sorceror", and it bombed. Mind you, it did have the misfortune to hit cinemas at exactly the same time as a funny little film called "Star Wars".

Exciting Clouzot classic. - The Wages of Fear review by Steve

The Wages of Fear is a classic suspense film directed by Georges-Henri Clouzot ('Les Diaboliques'). The premise is simple but effective: after a disaster at an oil refinery in an unnamed South American country 4 ex-patriots are hired to transport 2 truckloads of nitroglycerine to the site. If they hit a bump in the road..the canisters of nitroglycerine will explode with apocalyptic fury!

Although it actually takes over an hour for the men to embark on their near-suicide mission, the first hour is a well-crafted exposition setting the scene and establishing the characters and their interactions for the audience making the film more tense once it gets going. We never know why the poor men are here: they are trapped in an inescapable predicament since they cannot afford the return fare home. Bored and listless, the hero, Mario, indulges in attracting the attention of the local beauty while his elderly friend, Jo, picks fights in the town bar. In these early scenes, Clouzot masterfully establishes character traits - particularly, the macho posturing - which intensifies the tension and suspense later on as the men find themselves locked behind the wheel of a truck on a collision course with death.

The opening also enables Clouzot to take a swipe at American industry and the capitalist system which exploits the poor masses to satisfy the few greedy rich. This is shown through the character of O'Brien, the oil company's foreman. He offers a $2000 pay-out to anybody who transports the trucks knowing full well that this is a near-suicidal mission. During a meeting with other representatives of the oil company, O'Brien says that the impoverished men will do anything for money and, when asked about the support of their unions, O'Brien ironically replies "to hell with their unions".

So why do the men accept this near suicidal mission? One of the great strengths of Wages of Fear is the way the characters act out of complex motives. They act out of self-interest: during the journey Mario's greed for the 'dough' leads him to turn against his comrade, Jo (one of the few men who retains his humanity despite the lure of money). Towards the end of the film Mario is faced with a choice over whether to save his friend who has fallen in an oil spillage or continue with the mission: it's hard not to see this as symbolic of the capitalist system turning man against man. In another scene exemplifying this theme, Luigi says he won't waste time warning Mario and Jo of the dangerous bridge they will encounter because 'they should've stayed ahead' (so they would have found it out for themselves). However, these men also accept the mission precisely because they are men: in several scenes throughout the film they posture their masculinity (a facade to the fear that they really feel). In one classic scene, Jo ruminates about his fear leading Mario to call him a 'woman who is too scared to do this job'. Jo - who is characterised by his wisdom and pragmatism - replies the Mario is a man who will end up having his balls hanging from a tree. Ironic considering the film's surprise denouement.

Despite the film's Marxist trappings, Wages of Fear has many brilliantly orchestrated moments of suspense which have been imitated by numerous films since but never bettered. Film was re-made by William Friedkin ('The Exorcist') as the criminally underrated 'Sorceror'. Although the latter has some brilliant set-pieces, I prefer the original for its depth of characterisation and mastery of suspense.

Its in French! - The Wages of Fear review by PC

Silly me. Although Yves Montand made English language films, I didn't realise this is in French! Sorry. I'm sure it's a great film, but returned unwatched.