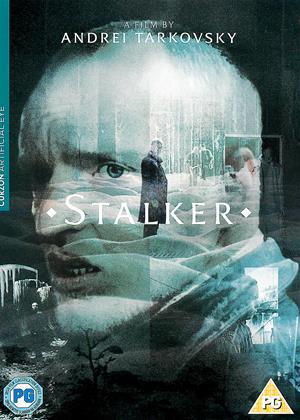 Synopsis:
In a future world that has been seemingly ravaged by war and poverty there exists a myth of hope among the people - a forbidden place known only as the Zone, the heart of which, if reached, grants one's innermost desires. Two men, a writer and professor, hire someone known as a Stalker; a guide who can navigate the treacherous and confounding path that leads to the centre of the Zone. 'Stalker' was instantly considered one of the most definitive artistic contemplations of human aspiration and the ambition we employ to achieve it.
Actors:
Alisa Freyndlikh, Aleksandr Kaydanovskiy, Anatoliy Solonitsyn, Nikolay Grinko, Natalya Abramova, Faime Jurno, E. Kostin, Raymo Rendi
Directors:
Andrei Tarkovsky
Producers:
Aleksandra Demidova
Voiced By:
Sergey Yakovlev, Vladimir Zamanskiy
Writers:
Arkadiy Strugatskiy, Boris Strugatskiy
Studio:
Curzon / Artificial Eye
Genres:
Classics, Drama, Sci-Fi & Fantasy
Countries:
Russia, Classics, Drama, Sci-Fi & Fantasy

There’s nothing really to compare Stalker to which is a unique piece of Russian science fiction from the minds that were responsible for Blade Runner. While the film departs on many aspects it maintains a eerie sense of wonder; ideally matched with Tarkovsky’s methodical style of directing. Responsible for the influential Solaris, his slow approach leads us into a series of wonderfully planned and framed delicate panning shots. It is a fascinating journey spread across two DVD’s due to the infamous problems in production that resulted in a re-shoot and a two-part approach. Stalker is a remarkable film for many reasons on and off the screen.

Imagine David Lynch directing "Last of The Summer Wine", but moving it from the Yorkshire Dales to Chernobyl. Extend the programme to nearly 3 hours, strip it of any humour & re-brand it as Sci-Fi. Watch Professor (Foggy), Writer (Clegg) & Stalker (Compo) stagger aimlessly through railway sidings, fields & deserted buildings heading for the room in "The Zone", hoping to make their wishes come true, but taking a long time over it! We kept expecting the guys to stumble upon a bath & go sailing down a hill, but unfortunately - it just didn't get as exciting as that! Some readers may say we're missing the point, but we disagree - if you want to see a beautiful thought-provoking film, then watch: "Spring, Summer, Autumn, Winter And Spring" - it's much more enjoyable...

Hope this clarifies the matter!

Slow in places, but magnificent achievement - Stalker review by Oli

Where do you even begin with this film? It is fantastic, the direction by Andrei Tarkovsky is just breathtaking, I'd come into this seeing Solaris by him which was also brilliant, kind of similar to this bit slow but rewarding. By slow I mean there's a lot of scenes where it will just show the scenery of 'The Zone' or there will be some philasophical dialogue whilst the 3 men are trying to sleep, but the shots are as breathtaking as any film you will ever see, the direction is superb and the story will keep you on the edge of your toes to see what happens, I wont ruin anything but I'll just say there's never been another film like it, the acting is great the dialogue is great, direction is superb, I like as well how it starts in the yellowish black and white, but then changes to colour once they arrive in the zone. It's one hell of an achievement!

Considering I have been wanting to see this for nearly forty years it was a huge disappointment. Nothing happens. There is no meaning. There is no drama. There is almost no story. Nothing is explained. It is tedious beyond belief. The mis-en-scene which may have seemed innovative in 1979 is now tired and done far better in many average recent film and tv dramas.

How did the director of Andrei Rublev (one of THE greatest films, and one I have seen several times) sink to this?