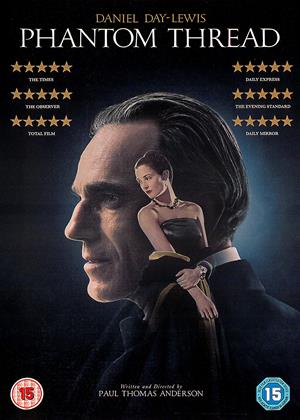 If you're looking for action forget it, this is a character based drama, with most of the action taking place within the sumptuous house. Having said that, it is a fascinating film.

Reynolds Woodstock is a dressmaker, his trade learnt from his deceased mother, whom he constantly misses. He has no idea how to treat other women in his life though. Early on we get a glimpse of his behaviour towards women with his current lady friend, whom his toady sister ( brilliantly played by Lesley Manville) offers to give marching orders to, as she knows when her brother has had enough of his current fancy. This gives the impression that this abuse, in the form of mental abuse displayed by Reynolds is a regular occurrence.

He then meets a waitress whom he takes for his new lady companion, namely Alma, played by Vicky Krieps in an impressive role. Alma at first becomes another sycophantic lover, bending to all Reynolds ridicolous whims. Of course, this total obedience is not enough and Reynolds starts to grow tired of his latest conquest. Alma will have to change the game or follow the fate of his previous partners.

There is a hint of mental illness in Reynolds character, perhaps in the form of OCD. Daniel Day Lewis is superb as Reynolds, an arrogant, totally selfish, rude, in short, complete pig of a man.

This film is another wonderful collaboration between the highly talented director and actor. It does not quite reach the absolute classic heights of their first teaming up for the masterpiece ,There Will Be Blood, which I thought was Anderson's and Lewis's greatest work. Nonetheless, a fine film, which I will definitely watch again when it is released on DVD.

12 out of 15 members found this review helpful.

This is one of the least plausible or convincing films I have seen for a long time. At first glance it looks very beautiful - as you would expect - but the feebleness of the plot is matched only by the stilted, two-dimensional acting of the principals. This may not be their fault - the script is risible - but it does not make for a good film. If you want endless close-up shots of Day Lewis (and he is handsome enough), it is perhaps worth watching. Otherwise, ignore it.

Truly awful, nothing film. No purpose whatsoever just a pay day for the actors. One of the worst films I've ever endured!

This is a superlative example of modern film. - Phantom Thread review by DW

Unhurried & understated, this is a fascinating story of love & dependency. The plot line is easy to accept as being realistic whilst absorbing. I'm glad I ignored the negative reviews.

Vicky Kreips is apparently a German movie star little known in UK/US. She holds the film together, in the unlikely role of ingenue/ poisoner! A strange film, that looks good, but doesn't give a lot away as to where it is going, which turns out to be not a very good place in the end. Don't expect light hearted romance!

Bored me to tears - Phantom Thread review by RP

Really could not be bothered, tried for and hour then gave up, my wife persevered to then end but she was not impressed.

The film is as finely crafted as one of Reynolds' dresses. Care and attention has been paid to every frame; the locations, the sound, the cinematography, and the music are all perfect. The acting is superb - Day Lewis' performance is detailed, nuanced and and completely absorbing to watch.

DDL is great actor. No question. The girl in film, is a match. Lesley, the sister, is brilliant. The film is a bit pedestrian, and one tends to lose empathy with the characters, and how they live their lives. That was the day, but does not save the film.

Shame if this is DDL's last performance.

I can see how some people might love this...but I hated it! - Phantom Thread review by Champ

This is a well made film, with great performances throughout. However, I had not the slightest interest in any of the characters, or anything they did, and came to actively dislike them all by the end of the film. I can understand that some might enjoy it, but the Daniel Day Lewis character is so appalling, and not remotely sympathetic, that I actively wanted him to die (spoiler: he doesn't; I was dissappointed).

I wanted to watch this as Daniel Day Lewis is one of the world's greatest actors and so I assumed it would be an interesting film.

However, I don't know why he chose to take the role. It is nothing compared to his past films, an absolutely pointless plot. Not even sumptuous by Hollywood standards, like a low budget British austerity B movie. Immediately forgettable.

An interesting but claustrophobic tale - Phantom Thread review by PJ

In 1954 London, Reynolds Woodcock, a fashion designer, creates dresses for members of high society. His fashion house is successful and run by him with the crucial support of Cyril, his sister. When he meets a plain waitress in a restaurant, out in the countryside, he turns her into his main model, then starts a relationship with her.

The film is about that relationship, between him and her (Alma). It is a very good period film and an interesting sentimental tale of 2 people who get to know each other and, gradually, find a meaningful way that they can communicate. The acting is very good and so is the re-creation of London in the 1950s.

The film is slow-moving and, in some ways, very little happens, beyond the meanders of the 2 characters' relationship and the ups and downs of the fashion house's business. There is something oppressive and claustrophobic about the story because Reynolds, the central character, basically is a control freak who is obsessive in everything he does. He can be possessive and abusive, in his own way.

So, overall, a movie I would recommend, but a somewhat strange experience in more ways than one, starting with the looks of the Germanic-sounding lead actress, Alma, who is expressive and magnetic, but not conventionally pretty, to say the least, in my view.