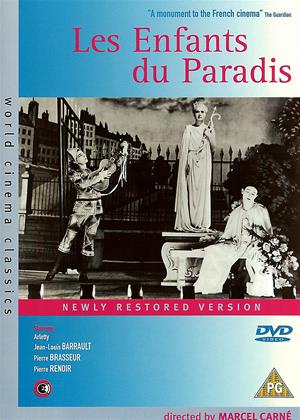 Reviews (3) of Children of Paradise

Lumbering but fantastic! - Children of Paradise review by IM

Old-fashioned , of course. The busy soundtrack bubbles on like a Pathe newsreel,

The story is like a curious variation on Brecht's "Threepenny Opera". Poor Arletty!

What does she want? What accounts for her magic spell over men?

Why do these men want to accuse her of theft - even murder?

I wonder if after the paiteb curtain is lowered on her trumdling carriage at the end,

if she's going to be accused of finishing off "son ami", the rich count (like the watch and the debt collector!

It's the intimate scenes that really resonate; evn more that the torrents of colourful extras who team along

the "Boulevard du Crime" at the start and end.

People watch this film again and again. I suppose the French see it as an amazing triumph of creativity as the Nazis

tried to subjugate and enslave the land of liberte, egalite and fraternite... See it at least once!!!

a moving if long period French piece. - Children of Paradise review by tm

a complex tale of four lovers with one woman in mind.

the plot is convoluted and at times unbelievable but I think the point is some parable about faithlessness identity, trust and self deception.

its been done better before and since. not entirely sure why it merits such esteem.

It's b&w, subtitled, over 3 hours long, set in the Paris of the long-distant 1840s, and although there is a duel, a murder, and physical assaults, these dramatic actions are [mostly] off-stage. If you can accept this, you'll find a romantic tale of a working-class woman, Garrance, who has four very different men in her orbit. She is, like the actor who played her [Arletty] determined to live fully but retain her independence. The film revels in the details of Parisian theatrical life and is wonderfully restored, the original prints having suffered over the years. It's a mature, perceptive film that is about the difficulty of being true to yourself. It benefits from being taken seriously; when I saw it at our local cinema club, there was an interval. This disc I saw over two evenings. Sorry if this makes it sound a bit heavy, which it's not; it's full of life and creates a convincing picture of 1840s Paris, especially the "Boulevard de Crime". You could call it Dickensian, except that it's much more honest about passion than Dickens ever was.

Some of the extras are very illuminating about the making of the film, and its actors.