Rent Tokyo Story / Brothers and Sisters of the Toda Family (1953) 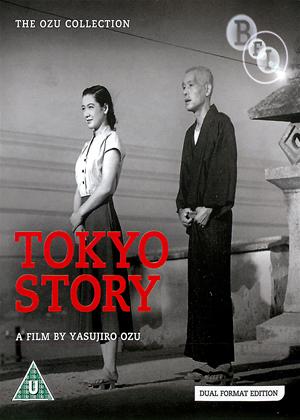 Slow essay drama exploring post-war Japanese culture is not, for me, 'the best film of all time' - Tokyo Story / Brothers and Sisters of the Toda Family review by BW

Toyko Story is one of the most critically acclaimed films. In a 2012 poll of film directors conducted by Sight & Sound it was voted the best film of all time. I find it difficult to understand such high opinions of the movie. I quite like this essay-type film which explores its subject matter with clarity, focus and a thoughtful, inquiring approach. Ostensibly the central theme of the piece is of grown-up children having little time for their parents. In the increasingly urban and westernised Japan of the 1950s, the siblings in this film have moved to Toyko and a metropolitan life that contrasts quite sharply with the traditional Japanese culture of their parents.

The brief review accompanying the copy I watched called the film a 'finely nuanced' drama but I see it very differently. The difficulties between the elderly parents and their grown-up children are repeatedly foregrounded and emphasised. It's not a slight thing glimpsed in gestures and tone of phrase but the basic narrative focus of the script. Similarly, the characters come across as quite plain and one-dimensional. There is acting here but it is of the Brechtian kind, as you might expect of a film-as-essay where ideas and arguments are being methodically explored by the drama. Other admirers of Toyko Story comment on the objective approach that the direction and camera takes - steady and unobtrusive, aspiring to a cinema of non-attachment in the Buddhist sense. I wonder if the polite and formulaic Japanese customs, manners and tatami mat gatherings often portrayed by the drama may amplify this idea of a similarly detached film-making approach.

Toyko Story seemed over-long but it does come alive in the final third of the movie. In scenes towards the end some of the characters uncover a depth and passion hitherto unseen. At the end, Toyko Story comes across as a film concerned with deep existential matters along with the cultural debates it either hints at (the Westernisation of Japanese culture) or boldly covers throughout (the difference between generations). It is a film that asks questions without providing shallow answers or polemics. I am a viewer who enjoys slow, thoughtful films and can rate black-and-white classics too but ultimately Toyko Story took too long for me to come alive and generate interest.