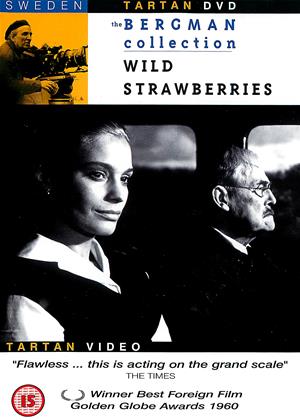 Synopsis:
Professor Isak Borg (Victor Sjostrom) travels with his daughter-in-law Marianne (Ingrid Thulin) to receive an honorary doctorate for his lifelong contribution to medicine. Soon his journey becomes one of introspection, as the people he meets - from a hitch-hiking girl to a quarrelling married couple - remind him of past relationships and cause him to contemplate his own failings. Victor Sjostrom, a celebrated film director in his own right, best know for his silent work including the Hollywood masterpiece The Wind, gives a remarkably moving performance as the aged academic.
Bergman's smiles and tears on a summer's day make for his most overtly symbolic work, shifting skillfully between the past and the present, dream and reality. Filled with richly observed characters and a real feeling for the joys of nature and youth, 'Wild Strawberries' is one of Bergman's warmest and finest films.
Actors:
Victor Sjöström, Bibi Andersson, Ingrid Thulin, Gunnar Björnstrand, Jullan Kindahl, Folke Sundquist, Björn Bjelfvenstam, Naima Wifstrand, Gunnel Broström, Gertrud Fridh, Sif Ruud, Gunnar Sjöberg, Max von Sydow, Åke Fridell, Yngve Nordwall, Per Sjöstrand, Gio Petré, Gunnel Lindblom, Maud Hansson, Ann-Marie Wiman
Directors:
Ingmar Bergman
Producers:
Allan Ekelund
Writers:
Ingmar Bergman
Others:
Victor Sjöström
Aka:
Smultronstället
Studio:
Tartan
Genres:
Action & Adventure, Classics, Drama, Romance
Countries:
Sweden
Awards:

Moving and graceful; existentialism at its best. - Wild Strawberries review by CP Customer

I loved this film, from the beautiful imagery to the haunting tale of an old man reliving past rights and wrongs whilst, assessing his existence and impending death.

The people he meets on the way tie into his dreams, memories and beliefs but also add a new perspective to his fixed views of the past leading to the present.

I watched it first with little knowledge or understanding of Bergman's own life, then, having read the 'Bergman on Wild Strawberries' excerpt in the extra features, watched again with a new perspective. The links to Bergman's own life are strong and powerful, the distant relationship with his mother, the similarities between son and father; the perceived lack of warmth or empathy toward of from other people in Isak's life drive steer his story.

Victor Sjöström as Isak is touching and likable despite his back story of selfishness and coldness. Somehow Sjöström brings a desolation to the role which, without being spelled out, displays his fragility and remorse with a depth it is difficult to explain. The way Isak links to, and learns from, his passengers is beautiful; Equally, the way in which they represent his past and challenge the present is resounding and yet, he also brings to it personal feeling, making one question if Victor Sjöström knew he would be dead within 2 years of the film's release.

This is a film which can be watched from a distance I suppose, perhaps. However, I think one would miss out on a warm tale of perceptions and memories and how they shape and dictate one's perspective if left unquestioned or unchallenged.

Watching this again after a gap of a couple of decades I was struck by how well it has aged, though the innocent ebullience of the younger characters is definitely from another era.

A wonderful essay on memory, ageing and the human spirit.

I was surprised by how much I enjoyed this film. It was a gentle pleasure. Striking camera work and lighting and particularly engaging performances by Victor Sjostrom and Ingrid Thulin. Although not an "action" film there is plenty going on and it held my attention throughout.