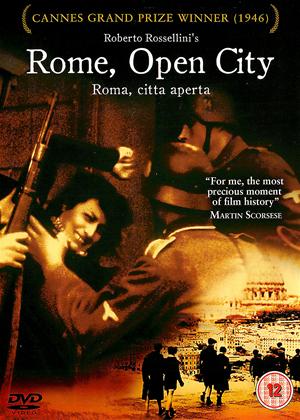 Cinemadiso's 1940s in Films Vol 2.
15 films by cinemadiso
Wes's Rented
284 films by wes
Frankie's 1001 Movies You Must See Before You Die
982 films by frankie
HumilityPrim's Favourites
159 films by humilityprim

Important and inspiring documentary style drama about the Italian resistance, which kick started the Italian Neo Realist movement. Remarkable that it was even made, more so that it is so brilliant.

The four stars are for the actual film, which is a compelling and beautifully acted tale of the Italian Resistance in World War 2.

Unfortunately, although this great film was re-released a year ago in a new print with new subtitles, I was sent the old print. It's quite grainy and, worse, there are only subtitles for about 50% of the dialogue, if that! I had to read up on the whole plot before I could watch it and, while it was worthwhile, why not get the new Blu-Ray for customers?

Forgive the quality of the print. Much of it was pieced together from scraps of stock left over from the German and American forces, giving some idea of the circumstances Rossellini worked under in making this film. The bombed-out buildings, the streets, the very clothes the people stood up in, were as authentic as you can get. Filmed in 1945, immediately after the German occupation, it is filled with all the vitriol you may expect, which goes a long way to forgiving the total black/white, good/evil divide, but the portrayals of the head Nazi and the femme fatale spy as homosexual (and therefore somehow depraved) is less easy to overlook, even when taking the very different attitudes of the time into account.

Because it was made while the smoke of war was still in the air, there is a convincing feel to it - even German P.O.W,s were used as soldier extras! Non-professionals for most of the cast add to the 'reality' of what we see. 'Rome, Open City' was not the first film made in a certain style, with a particular content, which came to be known as 'neorealist', but it was the first to gain international recognition, winning the best film prize at Cannes. How much the success influenced further (and greater) examples will remain conjecture, but its groundbreaking significance will not.

The documentary, realist direction may give a ringside seat, as it were, to a certain time and a certain place, but it does have the drawback of concentrating so much on authenticity, that the characters who inhabit that certain time and place become amorphous. This does not happen in, say, 'Bicycle Thieves', because the focus is solely on the man and boy; it does not happen in 'The Battle Of Algiers' because the story is the conflict, not the characters. But 'Rome, Open City' has quite a large cast, with a number of them given considerable time on screen. Two of them: Don Pietro and Pina turn out to be the protagonists. Because of Rossellini's distancing effect however, their fates become just another occurrence of the tragic period. Should we feel more? I think we should - but it doesn't happen. Nevertheless Aldo Fabrizi and Anna Magnani, two of the few professionals in the cast, are wonderful.

It cannot be seen as the greatest of neorealist films, yet there is no doubt it is one of the landmarks in the history of cinema.