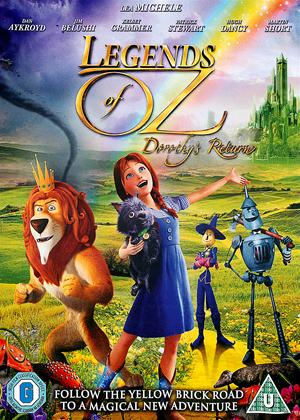 Rent other films like Legends of Oz: Dorothy's Return

It seems like every year there comes a couple of animated films that rely on most of their budget to secure big name talent to voice their characters just so they can hide the fact that the films story and animated prowess is nowhere to be found thanks to the directors own inadequacy or the studios failure to detect a dud script. The Legend of Oz: Dorothy’s Return is one such film.

The story follows Dorothy (Lea Michele) as she returns to Oz to help her friends out of yet another bind. When she gets back she must go toe to toe against The Jester (Martin Short), someone intent on causing all types of trouble over Oz with no signs of stopping. With the help of her four trusty friends and a slew of others she must think up a plan to defeat him and return Oz to the peaceful land everyone envisions it to be.

With the voice work of actors like Kelsey Grammer, James Belushi and Dan Akroyd to name but a few one would easily come to the conclusion that they flocked to the picture due to the story and the attention to detail within, the truth is that none of those things exist in this odd, unpleasant and predictable retread of a story done in many better ways. Sure the villain may be new but the world is not and the way the film handles Oz is to turn it into a generic wonderland, one with no concept of tension or the possibility of strife.

Dorothy waltzes through the story without a care in the world despite her protestations there is never a moment that the story isn’t plastered all over the lazy script, one more interested in playing cutesy gimmicks than real heartfelt character beats. All in all this is tripe of the highest level that cannot even be considered good family entertainment. Kids may be distracted by the bright colours and the pretty animated characters but anyone else seeking value here should look somewhere else unless you were considering suggesting this to someone you secretly loathe as a form of punishment, that I imagine might be pretty entertaining.