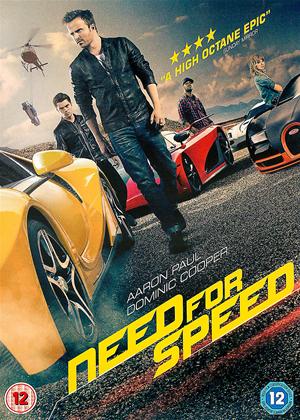 Reviews (2) of Need for Speed

It's alright.... - Need for Speed review by Chris G

Reasonably good, the story line is drawn out and very long winded. Good film just too long could of been an hour shorter!

Although the cars are impressive (even I, not being *into* cars, would like to drive some of them just to experience the sensations) the storyline is a tadge too predictable with the token (and nowadays, predictable) woman in a lead role, but who doesn't actually contribute much, and has contradictions (Vide the scene when the car is 'helped' by the helicopter, and she screams like a girl, when she is supposed to be unfazed by the power of the driving of powerful cars). Not a bad film, just not great

Aaron Paul seems to be on the edge of a major emergence into Hollywood and all he needs is a hit under his belt to solidify proceedings. Along comes Need For Speed, a film gambling on Paul's popularity coming off of his five seasons playing lovable drug addict and crystal meth cook Jesse Pinkman in Breaking Bad. While its easy to see why they cast him its even harder to see why he said yes in the first place.

Need For Speed follows Tobey (Paul), a street racer who finds himself serving a prison sentence for a crime he didn't commit, a crime that involved the death of one of Tobey's friends. When he is released he goes in search of revenge against Dino (Dominic Cooper), the wealthy racer that put him behind bars and framed him. When Tobey enters a race looking to exact revenge on the course Dino puts a bounty on his head so that he cannot get any closer.

While Paul skates through Speed relatively unscathed I cannot say the same for Cooper who, much like in his various other films, sucks up screentime while chewing every piece of scenery around. Tobey's choice of love interest also leaves much to be expected as Imogen Poots adds little to her exotic car dealer character, somehow making this exciting and expensive job common. The whole film is built around bad acting and nonsensical story from beginning to end.

Thats not to say there isn't some fun to be had with Speed because it features some impressive action. The film, directed by former stunt coordinator Scott Waugh, has some excellent action set pieces and the way he makes the cars characters is exciting as he edits together some stunning chases. Not only do these races seem dangerous and adventurous but they may leave you slightly breathless by their pacing.

The film may not be the new Fast & Furious but it does know how to have a bit of fun with its own story with Waugh ignoring huge plot holes in favour of outlandish action that, with the assistance of a story that was even remotely worth a damn, would give Vin Diesel a run for his money