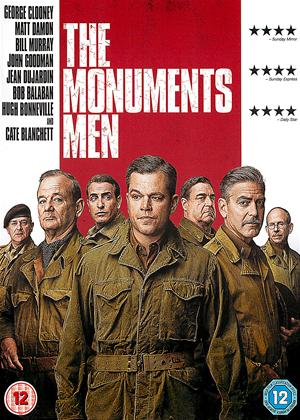 Reviews (3) of The Monuments Men

Interesting and entertaining old-fashioned boy's own war movie - with art! - The Monuments Men review by PV

I really enjoyed this film. It covers a story not covered before in any mainstream movie (there was a very slow British TV movie about how Britain's art was hidden in a mine in Wales, but...)

An all-start cast, a good pace, some decent structure and jeopardy, though some feels tacked on (esp the guff about a statue and a nasty Nazi with a sling), all make this a predictable but enjoyable quest movie. Based on truth, and real-life photos are shown at the end, but one can only wonder how much is really true.

Certainly, the language is more 21st century than 1944: no-one then was 'tasked' with doing anything, I believe (that came into the language in the 1990s), and the word 'teenager' was first used by an advertising agency in 1948 (though 'teen-age' was used well over a century ago) - so how can these old soldiers in 1943/4 refer to being shot at by teenagers in training?

But anyway, a good enjoyable romp, and an opportunity for some older actors to have fun. Practically no women in the film (just Cate AKA Claire) and absolutely no ethnic minorities (except Jews). That is how one can tell that this got absolutely no funding from the pc BBC...

4 stars. A proper movie for art-lovers and boys who like old war film like The Great Escape of Kelly's whatever...

Passed a wet Sunday afternoon away worth the money,give it a go

Three stars because of the cast ... - The Monuments Men review by EM

But each and every one of them was wasted.

This could have been such a good film, after all, it is a true story. But the screenwriter(s) and the editors need to be shut in a room and played this film on continuous loop for their sins. It is disjointed, lost, ineffectual and stereotyped. (cue Russian officer looking defiantly Russian). All the actors were disengaged with their roles and simply mouthing their lines as if they couldn't care less. And in the end, I didn't care less either.

*sheesh* another 90 minutes to me forever.