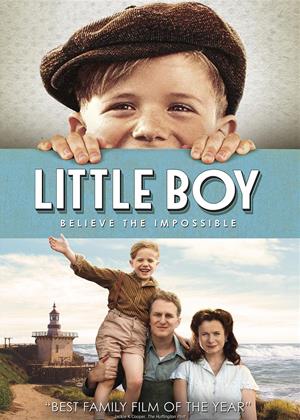 Little Boy’s overly-sentimental script is paved with good intentions, but so is the road to hell. It’s a simple story of a boy just wanting his dad to come home from World War II, built for jerking tears with its moral core and religious context. But rather than feeling like a genuine tale of belief, Little Boy is yet another faith-based drama right off the Lifetime assembly line. Swelling music, over-acting, under-acting and glossy lighting load this picture up with more artificial sweetness than a diet soda.

I’m positive that my negative analysis of Little Boy is sure to garner some bitter sentiments from those who applaud its simple drama. It’s not that I don’t want to appreciate the plucky 7-year-old Pepper struggle with his small height and missing dad during the war. I wanted to cheer for him when he believes he has magic powers to move mountains and bring dad back home. I even thought some of Pepper’s fantasies about fighting crime and being a cowboy with his dad would be cute. But even though the picture means well, the picture ultimately comes off as ignorant and scattershot the way a child attempts to conceive a story.

If Little Boy was only about a boy wishing for his father to come back and learning about life’s challenges, it would be okay, but it tries to cover far too much ground. There’s a message about diversity the way Pepper grapples with his short height that makes him a massive target for school bullies. There’s a message about racism in how Pepper befriends a Japanese citizen that he originally despises from wartime propaganda. There’s a message about religion the way Pepper’s pastor assigns him a list of moral activities to give him an extra boost of Christ karma for his dad to come back. And there’s even wartime drama the way the picture constantly cuts to Pepper’s dad in the field with bullets zinging and men dying. Did I mention the older version of Pepper narrates when it’s convenient?

Piled on top of this bloated script is the most blunt direction - a textbook case for how not to conceive drama. It destroys the most basic elements of generating tension. A soldier comes to visit Pepper’s home and we know what’s coming. There’s a bit of a surprise when it turns out Pepper’s dad is only captured, but it’s depleted when the soldier shows up again to say that he was killed. And then again to say he was not killed. Of course, the whole picture is directed to be too sweet and enduring that it’s no surprise Pepper’s dad comes back alive. The two false endings to his arc do absolutely nothing to spin the story in a different direction.

And then there are moments where the movie just becomes disgustingly misguided. Kevin James shows up as the town doctor that tries way too hard to come on to Pepper’s mom. Considering the doctor’s son also happens to be the bully who constantly shoves and harasses Pepper, I would’ve expected the doctor to be just as abusive. But it is Kevin James and he has to have the pleasant charm while he’s attempting to sleep with a woman missing her man. And in one of the most inappropriate moments of the entire movie, Pepper actually believes that he was responsible for ending the war in that one of the atomic bombs was named Little Boy. At first he’s ecstatic that his powers wiped out Japanese people, but then he’s depressed when he realizes his powers wiped out Japanese people.

Little Boy needs to either grow up or improve its intelligence to realize what is touching and what is just ridiculous. It’s a movie that I really want to love for its solid message about all it tries to wedge in there. I also wanted to approve it for being one of the rarest of faith-based movies that doesn’t shove such a lacking agenda into its script. But the direction is just a mess at never finding a tone to settle on or an arc to follow. In that sense, the picture is rather maddening for not being bad enough to be good or good enough to be engaging. The best that can be said of this picture is that it has solid production values in Pepper’s daydreams and fantasies - even if one of them is imagining himself walking among the impact of the atomic bomb.