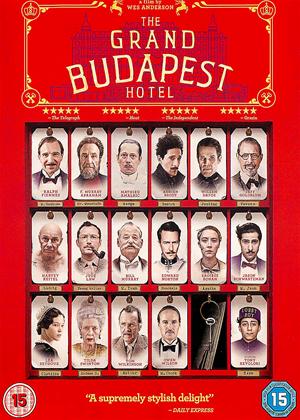 Reviews (13) of The Grand Budapest Hotel

The Grand Budapest Hotel fully delivers on its promise of a colourful, racy, old-fashioned tale set in Middle Europe. There is a kaleidoscope of characters and among them strides the wonderful, imperious Gustav H, manager of the hotel. Gustav H (played with real zest and delight by Ralph Fiennes) is introducing the new bell-boy to the ways of the hotel and so we the audience are also initiated into the little cosmos of the place - the rooms, the guests, the staff, the routines, the secrets and everything that goes to create the Grand Budapest Hotel. The narrative pace is brisk and the characters are varied and engaging. The story tends towards hyperbole and exaggeration, but the director and the actors ensure that the result is comedy and we accept the excesses as part of the fun. A great entertainment.

Must see!!! - The Grand Budapest Hotel review by ND

I was really looking forward to this film, which usually means I'm left feeling a little disappointed. From start to finish I had a smile on my face, there is no point in telling you more than that. Best film iv seen In a long time.

Loved every second of this stylish film. The music is wonderful and there are some laugh out loud moments. This is def one for the home DVD collection!

Found to be very disappointing. - The Grand Budapest Hotel review by BE

I was really looking forward to this movie but have no charitable words for it. It came across as stylised rubbish, empty and unfunny. I gave up half way thru. Ho hum!

I had no idea what to expect from this film other that it had received mixed reviews. For the first few minutes of watching I was still unsure. Then I tuned in to its quirky offbeat style and loved every minute. You'll probably love it or hate it, too. Only one way to find out!

Its a strange film ! Not what I expected, but I like that. Well shot and acted, but just really odd......still I'd recommend a viewing, but not sure I could watch it twice.

What a fabulous film! Odd yet understandable, very well acted, surreal but not pretentious. And very funny. Don't miss it.

This film is more sheer fun than anything I've seen for a long time. I strongly recommend it. Actually your life will be diminished if you don't see it.

Like the hotel itself, and like the fancy cakes baked by Agatha in the film, this film is more style than substance. It didn't add anything to my understanding or appreciation of the world, or leave me with anything to take away. I think it was designed as entertainment, and at times it was mildly entertaining. The acting was good.

I've followed Wes Anderson's career for a while now. I enjoyed 'Bottle Rocket' but honestly left 'The Royal Tenenbaums' and 'The Life Aquatic' more bemused than amused. As a result I let his subsequent movies pass me buy , but a recent clip from 'Isle of Dogs' got my attention so while coming to CP to reserve it I looked back through Andersons catalogue and saw 'The Grand Budapest Hotel' and decided to take a chance on it. I'm so glad I did.

Anderson is not a conventional storyteller. His is a singular vision and his idiosyncrasies are on show in every way here, from the humour to the dialogue the style and the pacing . If you are willing to go with it then there is a lot of fun to be had here , if not then maybe you should pass on buy.

Unusually when it come to movies I would recommend the trailer - it captures the style of the movie well and doesn't spoil you with all the best bits in the movie. If you 'get' the trailer then there is a good chance you will 'get' the movie.

As other people have mentioned Gustave H delivers his dialogue at some speed , so if you have a home cinema setup with a decent sound setup make use of it; I tried first watching it on my computer but the poor speakers really did not do my experience of the movie any favours.

Welcome to the Grand Budapest, a place of debauchery, fine service and some seriously unusual antics, and thats just from the renowned concierge/manager Gustave H (Ralph Fiennes). The Grand Budapest is also a place of unwavering loyalty, emotional confessions and more heart that you know what to do with. My point being, this is a fine follow up to Moonrise Kingdom and a great addition to the Wes Anderson collection.

The film follows Gustave and his relationship with new lobby boy Zero (Tony Revolori) as they are sent on a mission to prove that they own a painting passed down to Gustave by one of his patrons. However he must face off with her conniving son Dmitri (Adrien Brody) and his henchman Jopling (Willem Dafoe), a menacing man intent on protecting the family. With the help of the Budapest staff as well as Zero’s girlfriend Agatha (Saoirse Ronan) they might just get out of this sticky situation with the painting and their lives.

The best part of The Grand Budapest isn’t the usual Anderson style, the quirky comedy or the powerhouse comedic performance by Fiennes, its the fact that the film deals in weighty topics but never lets it control the tempo of the story or the power of the laughs. In fact I could compare Budapest to American Graffiti, a film that dealt with tough topics but never let it guide the uplifting story. Both films finished on an elated notes only to leave you pondering if what you saw was truly ‘happy’.

That being said Budapest wouldn’t work without the awe inspiring turn by Fiennes as he bites into everything Anderson gives him with gleeful abandon. Gustave is a delightfully giddy character, one never disheartened by life. He is a man who lives life to the fullest while taking advantage of its little pleasures. The story might be told by Zero but it would be nothing without Mr Gustave H, the funniest and campest Wes Anderson character in years.