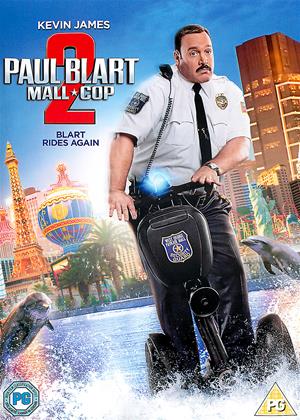 Like one, like two. To be fair i am not too fussed if he got shot. Is interesting to see a large person cavort, seemingly defying gravity. Goodman could do it, once, when the football training was still in place.

This is ok if nothing else to watch, but it is nowhere near as good as the first film. They have made it way to silly and childish.

not great but a time-filler - Paul Blart: Mall Cop 2 review by AB

Amusing in parts, saccharine in others, but overall not a great film - too twee, too predictable, too American to be of any good. Kills a couple of hours of your life.

The single decent message from this movie, diluted as it became, was Kevin James’ forced speech about how you need to stop just doing things for yourself and help another human being. Taken to heart, I shall do a kindness in relaying the atrocity to others that was Paul Blart: Mall Cop 2. Similar to its protagonist, this is a bloated mess. And if you think that’s a mean slam against Kevin James’ weight, it’s nothing compared to how bluntly this movie reaps from that old well of humor.

The plot is the same as the first movie. Paul Blart (Kevin James) finds himself in a new venue - a Las Vegas hotel - where he must stop some evil men from ripping off some art from the hotel. This happens during, of all things, a security guard convention. Despite his lack of tact and agility, Blart somehow once again becomes the unlikely hero. The character is the same as he was in the first movie. Paul Blart is fat and stupid. I wish there was more to describe the character, but the entire joke is that he is fat and stupid. He’s so obese that he crawls on the floor for ice cream, sulks with a big bowl of peanut M&Ms and breaks into an excited squealing for leftover baked ziti. He’s so absent minded about the world that he almost voluntarily lets himself be hit by cars, kicked by horses and attacked by animals. He even has a terrible personality the way he believes a woman is coming on to him from simply admiring his talent, going so far as to earnestly reject her advances that are never made. By the way, Paul Blart is also fat. Don’t worry if you already forgot. The movie will remind you several times.

Keeping with the Blart template, the movie is packed with plenty of simple characters built for one joke. Blart’s daughter Maya (Raini Rodriguez) exists as a sweet teenager who stresses about her overprotective father. She receives an acceptance letter for UCLA - which could have been the perfect escape for her from this movie - but she holds back that information to tag along as a hostage for the bad guys. The bad guys themselves, led by a mostly forgettable Neal McDonough, are your standard no-nonsense criminals that are all business until bumbling amid Blart’s assault. Blart has himself a crew of admirers at the convention which are security guards themselves. All of which exist for one joke only. There’s a sassy, big black woman (Loni Love) who serves as a guard at the Mall of America. You’d think she’d have some interesting stories to tell from working at such a notable mall. Nah, she’s just another fat joke proving that the script’s juvenile nature knows no race or gender.

I’d like to think that James is better than this, but the question remains if he actually wants to be. These type of films fit into that shameful category of comedies known as vacation movies. Basically, James and company are not so much making a movie as they are staging an excuse to visit a location for fun. For Jack and Jill, it was a cruise ship. For Blended, it was Africa. And now with Paul Blart 2, we have the Wynn Las Vegas hotel and resort. All the film needs to do is provide a bit of a plug and the filmmakers have their vacation set. Blart 2 goes the extra mile as when they actually feature the hotel owner Steve Wynn. I’m pretty sure Wynn could have even had some lines of dialogue if he just asked. It’s unlikely director Andrew Fickman would say no given how shameless he is with product placement. Anymore plugging of the hotel and Fickman is going to start an electrical fire.

There are no jokes in Paul Blart: Mall Cop 2. There are not even smiles. What is present are thinly veiled ideas of jokes that have been watered down and lost to a sea of laziness. If you take what is on screen, push the conception of the “gags” through your brain and picture them with better writers and actors who can deliver a punchline, you might just get a laugh. One more thing; Paul Blart is fat. Normally this type of character would be admirable and lovable for his enduring spirit - which the movie certainly tries to evoke - but there is just nothing to admire about Paul Blart. The movie tries to garner some pity for him in the opening and then do everything in its power to make you hate him. He’s rude, cocky, condescending, oafish and just awful to watch. Given how Kevin James actually co-wrote the script, it speaks volumes about his self-image being kicked by horses and slamming face first into surfaces. Which, by the way, the horse kick is so blatantly computer animated I’m surprised it didn’t go over the top by making Blart slam into a building and then make the building collapse from his force. You know, because he’s fat.