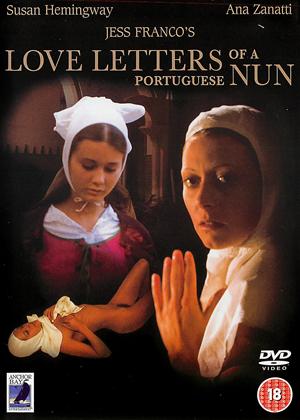 Synopsis:
A young girl, Maria (Susan Hemingway), is caught in flagrante delicto with her lover by Father Vicente (William Berger), who belongs to the nearby Serreda Iris cloister. The fiendish clergyman persuades her parents, who are poor and easily intimidated, to put Maria under his protection. She is brought to Serreda Iris, where the nuns seem to have an unusual interest in her beautiful body. After her virginity is proven by Mother Superior - who is called Mother Alma (Ana Zanatti)! - She gets her first undeserved punishment: several layers of thorns are applied to her skin.
It soon becomes clear that the monks and nuns of Serreda Iris are actually Satanists who perform black masses and lewd rituals to honour the Honoured One. Maria tries to escape, but she trusts the wrong person and is brought back. After that, she is questioned by the Holy Inquisition and tells all she knows about Vicente and Alma. The Inquisitor doesn't really believe her, but the accusation has uncomfortable consequences for the accused. So Vicente tries his best to make Maria revoke her statement. Maria, abandoned by everyone, loses hope, but first she wants to make things clear with the only friend left to her: She writes a letter to God and throws it out of the window. Her letter is found...
Actors:
Susan Hemingway, William Berger, Herbert Fux, Ana Zanatti, Aida Vargas, Vítor Mendes, Aida Gouveia, Herman José, José Viana, Patricia Da Silva, Victor de Sousa, Nicolau Breyner, Clara Marabuto, Esther Studer, Dagmar Bürger, Anton Diffring
Directors:
Jesús Franco
Producers:
Erwin Dietrich
Writers:
Mariana Alcoforado, Erwin C. Dietrich
Studio:
Anchor Bay
Genres:
Drama
Countries:
Germany

Rent other films like Love Letters of a Portuguese Nun

Unavailable
Eugenie: The Story of Her Journey Into Perversion

Reviews (1) of Love Letters of a Portuguese Nun

With a title like that, and a director like Jess Franco, it’s fairly sure that there will be a certain amount of sleaze in this film. I didn’t realise how much – in many ways this is his most perverse project. 15 year-old Maria Rosalea Coutinho (Sarah Hemmingway) is spied enjoying a playful kiss and cuddle with a local lad by Father Vincente (William Berger), who then manipulates Mariah’s terrified mother into forcing her into life at a convent. Vincente then brings himself to orgasm at the confessional booth after coercing Maria into telling of her mild sexual fumblings.

Many raised eyebrows were caused by the casting of Hemmingway, who looks extremely young, and who is tricked, coerced, tortured and humiliated by the hordes of liars, sycophants, perverts and manipulators around her, most of whom cloak their blatant indiscretions behind the veil of their perception of religion.

As you might well imagine, there are lesbian scenes between the nuns, complete with dialogue like “You have served the prince of darkness, now I will perform the ritual.” These are restrained for Franco, and frankly rather too long. It is the treatment of young Maria which is most effective – a pure innocent who has been cast amongst this nest of vipers because of what they consider to be HER bad attitude! It’s not nice at all. Especially as the unpleasant events are conveyed without spectacle, either by Franco, or the benign choral score from Walter Baumgartner.

As with all Franco/Erwin C. Dietrich collaborations, this is crisply shot and appears to have been provided with a decent budget. As always, the locations are incredible. An exercise in ‘nunsploitation’, the use of religion as a veneer of respectability is effective, and Hemmingway appears so naive with her character offering barely any resistance to the horror she finds herself in (excepting her pleas to a mother too stupid/timorous to help). Even Satan appears to join in with the black mass being practiced. Berger is highly convincing as Father Vincente, effortlessly bending others unto his will and gleefully taking advantage of Maria. You get the distinct impression he and others like him are used to getting away with these kind of atrocities and bare them no thought. Even through the barrier of dubbing, it is very easy to despise this rotter. Of all Franco’s output, I find this film one of the most difficult to watch.