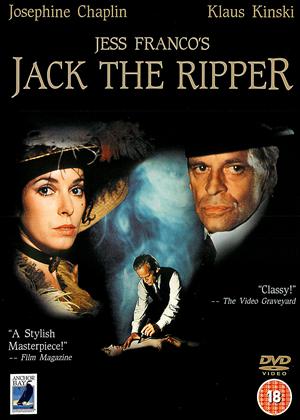 Reviews (1) of Jack the Ripper

Of all films I have seen helmed by Spanish Director Jess Franco, this is far and away my favourite. It may lack the exotic juxtaposition of horrific incident occurring in beautiful sun-kissed arenas, but what we have here is a satisfactorily recreated Victorian London, with a talented cast, and a consistent story that doesn’t meander.

Many events take place in the spacious ‘Pike’s Hole’ tavern, a convincingly cockney meeting ground, where ‘Jack’ finds many of his victims. The death of Marika (Lina Romay) is the most gratuitous of all, with a protracted scene suggesting Orloff has violent sex with his victims as the life fades from them. Inspector Selby (Andreas Mannkopff) proves to be a very effective foil for Orloff. Hans Gaugler is also excellent as Breidger, the blind man. In fact, the cast as a whole is very good, and a lot better than usual with Franco projects. Probably this is because he is working with a larger budget here – and it shows in other ways too. Beams of smoky light casting shadows through the branches of trees. Apart from a few panoramic shots of Big Ben and various London buildings, the bulk of this is shot in Zuerich Switzerland, and there is much genuine night-time filming, a very expensive procedure.

The storyline is a good one. There’s no point in trying to do a ‘whodunit’ – when you cast Klaus Kinski in a film about Jack the Ripper, he could hardly be playing a peripheral character. The intrigue is why he commits his atrocities, why does he appear to carve chunks off his victims while they are still (barely) alive? Inspector Selby’s girlfriend Cynthia (played by Charlie’s daughter Josephine Chaplin) appears to have the answer due to her resemblance to his mother. With his final victim finally degraded, it is apt in a way that he be captured and taken away in a finale that is disappointingly tame compared to the effective macabre nature of the rest of the picture.