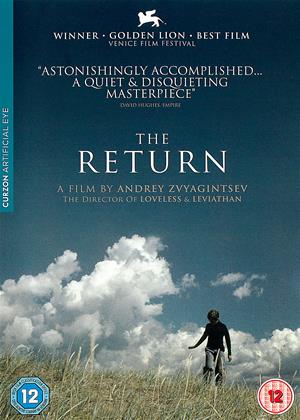 Reviews (9) of The Return

A real masterpiece by Andrei Zvyagintsev. The acting is wonderful, the setting brilliant & very eerie. Even if you don't like subtitles this will appeal as it's very visual with little dialogue. Sadly, the boy Vladimir Garin (who played Andrey) died shortly after the film was released.

Director Andrey Zvyagintsev went on to make Elena (2011) and Leviathan (2014). This, his first feature from 2003, clearly sets out his themes.

Reflective in pace, giving the cast a chance to fully inhabit the characters and reveal the narrative. Excellent cinematography, a simple story explored in depth, posing questions that extend you beyond the narrative.

In this one the two young actors playing the boys are outstanding - possibly the best child acting you will ever see. Tragically Vladimir Garin who plays the older brother died during post-production before the premiere. He was swimming in the same lake where the film was shot when he drowned.

This is modern Russian film making at its best.

A hideous Christ figure - The Return review by PW

It's worth looking at Mantagna's 'Lamentation of Christ (c.1480). This image was almost reproduced twice in the film, first early on when the returned father sleeps to be seen for the first time in 12 years by his sons, later after the twist. At another point a slow image of a boat coming to an island reminded me of a scene on the see of Galilee. The theme of return echoed resurrection but with no warmth or hope.

Andrei Zvyagintsev seems to want to subvert the central hope of Christianity. Yet this bleak, yet sumptuous film somehow avoided leaving the viewer devoid of hope. The mental battle between the father and his youngest son (us?) left me with hope in the human spirit.

This is a great cinematic experience from start to finish. Everything is blended together with careful skill: the characterisation of the brothers and the father; the stunning visual setpiece scenes; the music; the colour palette; the terse dialogue. It all works together magnificently.

The younger brother gives one of the best child performances in movie history.

I saw this when it was released and many images stayed in my mind. Seeing it again has made me realise what a landmark in cinema history this film is.

Probably his best work. Immaculately filmed. Tense throughout and incredible performances from all the actors. There is a great deal unsaid about the returned father which leaves him a bit of an enigma but we get hints of what he is like from his interactions with the two sons, the eldest of whom is readyu to accept him but the youngest and more sensitive doiesn't cope with it and rejects him. This is a great film, easily Zvyagintsev's best.

A great thought provoking film - The Return review by DR

A good watch - dark, stark and leaves you wondering for days. Brutal at times and as a father you see the plot from both the child and the fathers perspective - it shakes you like all good art. Well worth a watch especially if you like your films stark and emotional. Well acted and fantastic scenery.

The diving board - The Return review by CH

A devastating Russian film that I have borrowed twice already from Paradiso and I recommend it to anyone new to Russian films. It is a masterpiece, a tense, dark tale about two young brothers trying to make sense of the sudden reappearance of a man claiming to be their father. They must learn to accommodate him, but he is an awkward piece in this family's jigsaw. Is the expedition he has planned for the boys, for them or for himself?

gripping! - The Return review by SoniaGee

As the film proceeds, the mystery deepens. The suspense is there, and whilst not a typical family-viewing film,

I rate it very highly. For adults.