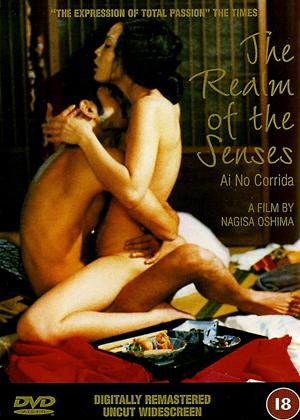 Synopsis:
Based on a true story, this is the story of one of Japan's most notorious scandals. An ex-prostitute enters service in a household and promptly begins an obsessive and sexually perverse affair with the master. What starts as a casual diversion escalates into a passion that holds no bounds. The intensity of the affair and the couple's mutual appetite for exploring the physical and sexual limits of their love-making completely overwhelms them and the strain of the relationship takes its toll on all concerned.
Actors:
Tatsuya Fuji, Eiko Matsuda, Aoi Nakajima, Yasuko Matsui, Meika Seri, Kanae Kobayashi, Taiji Tonoyama, Kyôji Kokonoe, Naomi Shiraishi, Shinkichi Noda, Komikichi Hori, Kikuhei Matsunoya, Akiko Koyama, Yuriko Azuma, Rei Minami, Machiko Aoki, Mariko Abe, Kyôko Okada, Kiyomi Yasuda, Hiroko Fuji
Directors:
Nagisa Ôshima
Writers:
Nagisa Ôshima
Aka:
Ai No Corrida
Studio:
Nouveaux Pictures
Genres:
Drama
Countries:
Japan, Drama

Rent other films like In the Realm of the Senses

Reviews (2) of In the Realm of the Senses

Be prepared for beautiful and explicit erotica. - In the Realm of the Senses review by DD

The synopsis under 'General Info' here gives a useful sense of the theme of the film. The drama and passion unfold beautifully and with elegance. The film is all the more stunning in the knowledge that it is based on actual events in Japan. Potential viewers need to be prepared for the explicit sexual scenes.

Is it pornography? - In the Realm of the Senses review by NP

After just a few minutes of watching this extraordinary film, you might find yourself asking, is this pornography? It’s a debate that has been going over forty years – none of the many sex scenes are simulated: what you see is what you get. Due to its nature, ‘In the Realm of the Senses’ has been banned and cut before release on many platforms, and the lead actors found themselves blacklisted for a while following production.

The story-line involves former prostitute Sada Abe (Eiko Matsuda) being molested by her new boss Kichizo Ishida (Tatsuya Fuji) on the hotel where she now works. This not only ignites hitherto unexplored sexual desires in both of them, but ostracises them from their family and friends. Their coupling takes on new taboos – namely torture, strangulation and blood-letting.

Such an unflinchingly raw story is presented in an equally graphic way, and constantly. A scene where a young boy has his penis pulled as punishment seems to have offended most, and the brief moment has been removed from many editions of the film.

The acting is first rate, and survives the necessity of subtitles better than most. Not outside the perverse extremes of Director Jess Franco have I seen such uninhibited performances in a non-porn film – if it is non-porn.

This reminds me a little of the later Japanese film ‘Audition’, where the comparative light-heartedness of the opening acts give way to scenes of uncompromising cringe-inducing torture best watched behind-the-fingers.

Directed and written by Nagisa Oshima, the film had to be processed in France rather than Japan because of its nature. It is an acquired taste and not something I’ll watch twice. There’s no denying, though, it is compelling. You’ll look away occasionally, but not for long. My score is 7 out of 10.