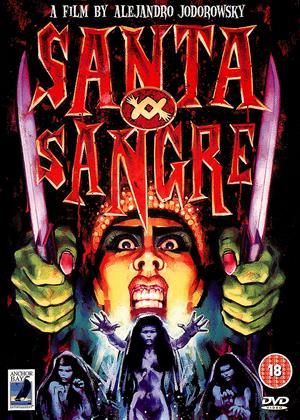 A effective but acquired taste ... - Santa Sangre review by NP

You may, like me, spend the first half an hour of this film, wondering what exactly you are watching. This bewitching, garishly coloured, strange, grotesque collection of moments and bizarre happenings are presented without build-up, and at first it is difficult to know if a story is being told or this is just one scene of carnival curiosity followed by another.

And yet director and co-writer Alejandro Jodorowsky weaves a spell-binding other-world that bares a passing resemblance to the freakish histrionics of Lon Chaney’s 1927 film ‘The Unknown,’ and even the body horror of ‘The Hands of Orlac (1924)’. The circus performers’ backstreets and carnal houses become curiously beautiful stages thanks to the unexpected use of colour and bombast. So much so that, with moments of genuine erotica mixed with gratuity and horror – although rarely explicit, merely extravagantly suggested – this convincing community becomes an all-encompassing theatre of the absurd.

At slightly over two hours long, ‘Santa Sangre’ is a long time for such ambience to sustain itself, and yet it does. It’s a persuasive grandstand on which to pin the central story, and yet with a myriad of powerful, idiosyncratic performances - including the extraordinary Thelma Tixou, and Adan Jodorowsky and Faviola Elenka Tapia, two spirituous child actors playing younger versions of two main characters – and always majestic directorial flourishes, there is no excuse for the attention to wander.

This won’t be to everyone’s tastes. I’m not even entirely sure it is to mine. It doesn’t become unusual, it is unusual from the outset and doesn’t let up the pace. But it’s difficult not to get swept up in it. Original and never lets up, my score for ‘Santa Sangre’ is 8 out of 10.