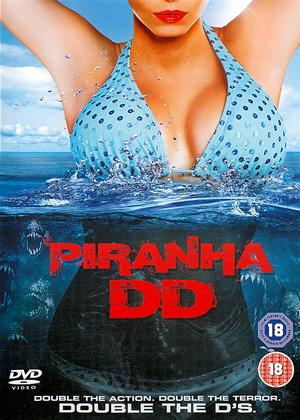 ‘Piranha 3-D’ is directed by Alexandre Aja who again remakes a 1978 Roger Corman creature feature-camp classic ‘Piranha’. At first sight it already pays homage to ‘Jaws’, spot Richard Dreyfuss in the beginning again alone on a boat. But sorry, ‘Piranha 3-D’ has none of Jaws’ bite. Consider this plot: a sleazy impresario (hilarious Jerry O’Connell) wants babes for his new low-budget film and takes them into a small town where apparently, piranhas come in swarms. The local Arizona sheriff (Elisabeth Shue), her deputy (Ving Rhames), and a scientist (Adam Scott) are more than concerned – not just for the impressionable young ladies that are just about to be exploited – but because piranhas eat people and we can’t let that, can we?

Film is uninterested in scares; the scary part is the predatory nature of Jerry O’Connell’s character that he imposes on the girls. Well, he gets his and it’s just a ‘sausage fest. To have it in 3-D is quite a daring suggestion but for the film makers to actually do it? Very brave indeed. Totally self-aware of how to utilize 3-D, the movie has its shocking moments for its audience: A girl throwing up and things get hurled at you. Jump off your seats, guys. That’s supposed to happen.

We do know that the special effects are quite remarkable. The CGI piranhas are life-like, and swim and swarm with such efficiency that you would believe that they have brains too. Small but terrible creatures, indeed, but no, they can’t be the mini-Jaws. They’re not formidable enough. The trick to surviving ‘Piranha 3-D’? Don’t just stay out of the water, stay out of it altogether.