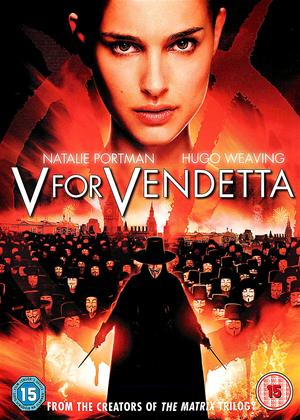 Reviews (6) of V for Vendetta

Over long, but a good story. - V for Vendetta review by CP Customer

Good action yarn about vengeance and rebellion. Some comparisons with 1984 and Brazil could be made, i.e. standing up to state control of society.

Poor editing spoils what is a good story, as the film does drag in places. However, performances are good and Weaving manages to stamp his mark on a role that many actors would turn down, I am sure, for fear of lack of recognition. Rea is particularly good as the detective.

In the wake of more recent super hero movies then this may have been overlooked but shouldn't be.

Take a pinch of Judge Dredd, mix with a hint of Batman and a pinch of Orwell's 1984 and what you have is a dark, gritty and visually striking movie.

Created by the guys that gave us the Matrix this film is a slow burner that explodes like a bomb.

V is a complex character, and bottom line an anti hero, in fact a terrorist and maybe it isn't right we should be cheering for him but consider the fact that the corrupt government is using terror to subjugate the population, is it any wonder that V turns it against them?

There are no shades of black and white here, most certainly shades of grey, but the film has an awesome cast and is a movie that will stick in your mind long after seeing it.

Give this a chance, but don't expect another spider man or x-men. Heck no. Great film.

This film has a lot of layers to the story and kept me engrossed all the way through. I had no problem with the editing which in my view gave the film a scintillating pace. Some masterful acting performances from an outstanding cast. A few years ago the plot would have been barely credible but sadly it seems the writer's warnings have been quite prophetic. A must see political thriller with some essential questions for the future, or just a great yarn; you choose.

15 years old but very relevant to now. - V for Vendetta review by JG

The abuse of power and exploitation of the masses for the elite is with us now and may get worse as Covid is used as an excuse to bring in ever more severe restrictions. Worth a watch if you haven't seen it, or it was a long while ago when we still had freedoms.

This remains a very relevant film and it's a great story. A very uncompromising condemnation of populism, weak politics, apathy and of course showing what happens when people allow control of their lives to become a reality. Set in a future dystopian United Kingdom where a fascist government run by a dictator, Chancellor Adam Sutler (John Hurt), ensures its control of the population by a severe insistence on religion, homophobia and racism all of which is allowed by an apathetic public and overseen by a military style police force. Then a terrorist emerges to challenge the authority, he calls himself V (Hugo Weaving), wears a Guy Fawkes outfit and with the help of a young woman (Natalie Portman) begins a campaign to bring down the regime. On its first release this was criticised for being rather too talky and not enough action but viewed today it doesn't feel like that at all and the action set pieces are quick and effective and very exciting. It's a really detailed story with some very sharp looks at modern society and a warning of what may happen if democracy is challenged and people sleepwalk into its destruction. The cast are impressively good including Stephen Rea as the cop hunting V, Stephen Fry as a broadcaster with a secret, and Tim Piggot-Smith as the regime's second in command - a sort of Himmler character. This film has developed a cult following over the years and V's iconic mask is recognised as a symbol of resistance. A quite powerful film, written by the Wachowski Brothers (now sisters), who were the creative force behind The Matrix (1999)

R for relevant - V for Vendetta review by HO

Wow, what a film. Can't believe i've only just watched it. How incredibly pertinent to the current situation and covid narrative.