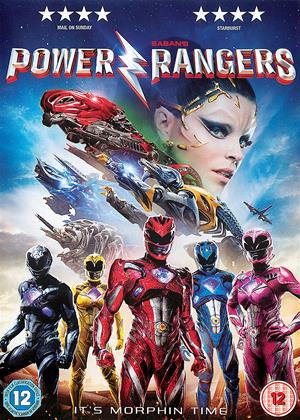 I understand that I am probably not the market for this film and I was too old to enjoy the cheesy TV series. However, this lacks any likeable characters, makes very little sense and also seems confused at who to make this for, too dark in places for very young kinds and too silly for anyone else.

Two stars for the special effects and Elizabeth Banks is clearly have fun as the baddie!

Short and sweat from me. The movie was all over the place. Had no real objective that I understood. But hay I am 51 and only rented the movie for the Dolby Atmos. In this regard the soundtrack was amazing. I reluctantly would watch the movie again just to hear the sound effects from my 7.1.4 system.

Dreadful Rubbish. Bunch of Detention Delinquents get Rewarded for being Arseholes by being made into Super hero's.... Great !

There was a time in my life when Power Rangers was the best thing since sliced bread. But having recently gone back to watch those old episodes, I found myself laughing at how bad this show was and how much I used to adore it. Despite the Power Rangers TV series continuing on to this very day, they still felt very much a product of my time, destined to be left behind as outgrown toys. Now I must endure this franchise once more in a modern reboot of the old series. Since I wasn’t as heavily invested in the original series, I’m all for a revision. Maybe not a darker revision akin to Michael Bay’s direction, but that’s just the world we live in, I suppose.

Two tones for this picture are established in the first few minutes. It begins in a prehistoric era where a team of Power Rangers perishes while trying to defend Earth from the villainous Rita Repulsa, ending with a sacrifice and a big explosion. Cut to a modern high school where two students lead a bull into the locker room, one of them explaining that they accidentally masturbated the animal. Yep, that’s about what I expected from a PG-13 remake of a kid’s show franchise. The good news is that the opening of a vulgar joke sets the bar so low that nothing as terrible could top it.

Director David Israelite makes a bold choice by focusing most of the film on the bonding of the teenage outcasts chosen to be Power Rangers. The familiar five are present, but with a few variations. Jason is still the jock, but now a more troublesome jock with a mountain of an ego to climb before he can be a leader. Billy is still a nerd, but now he’s both black and on the autistic spectrum. Kimberly is not as popular as she once was, having been recently distanced from the popular crowd of girls. Zack is now Chinese and a bad boy with a heart of gold for his ill mother. Trini is now an anti-social rebel, doing her best to put up a shield around her classmates and family. These teenagers certainly have more attitude than that of the TV series.

While these new renditions of the classic characters is most welcomed, these are changes that sound far better on paper as I liked the idea of the characters less than their portrayal. They are not embarrassing stereotypes or even illogical interpretations of youth by an out-of-touch writer, but they’re all stuck in the melodrama moral of putting their differences aside to work together. Only brief bits of each character are allowed to spill out in between the movie chugging through its standard superhero origins. There isn’t much time left for them to be amazed with their superpowers bestowed on them from a spaceship operated by Alpha-5 (the voice of Bill Hader) and overseen by the disembodied head of Zordon (Bryan Cranston). They’ll all just have to accept that they’re chosen to be heroes and go about the plot quickly as the evil Rita Repulsa (Elizabeth Banks) is aiming to destroy the planet.

There’s certainly a lot to could pull apart from this movie’s typical take on transferring a kid’s franchise to the big screen. I could speak at great length how the backstory of Zordon and Rita once being Power Rangers adds nothing to the plot. I could nitpick how Rita’s master plan of forming a city-destroying monster of gold only requires a few fillings and a jewelry store worth of gold to assemble. I could even go for the lowest hanging fruit of the dialogue being lackluster as the actors proceed through exposition and jokes without much character. I’ll spare you such pointless criticisms in a movie that was aimed to sell toys (and Krispy Kreme donuts apparently).

What it all boils down to is that there is very little of the Power Rangers in a Power Rangers movie. Sure, I would applaud the picture if the 80% of non-Rangers footage worked hard towards the final 15 minutes when the Rangers and Zords finally appear, but it becomes a repetitive bit for the hills and valleys of the teens. They are constantly told that they need to work together to stop Rita, yet continue to have several moments where they split up, quarrel, confess and train before they finally put on the iconic armor. And by the time the movie finally gets to the climactic battle of giant robots battling, it’s too little too late as the Ranger’s messily assembled Megazord dukes it out with the living vomit monster of Goldar. Don’t be surprised if the kids fast-forward directly to this finale, past the moral melodrama and lame jokes. I know I did when watching the series on VHS as a kid.

I’ll give the movie this: It’s far superior from 1995’s Power Rangers: The Movie where the evil Ivan Ooze used magical ooze to hypnotize all the adults of Earth. There’s none of that goofy and terrible writing here; just a cliché battle to save Angel Grove from another big monster, playing like an average episode of the TV series. Tune in two years from now where the Rangers stop another monster amid dealing with body issues and peer pressure.