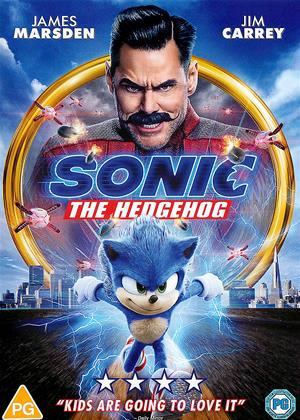 Reviews (1) of Sonic the Hedgehog

Should of been more fun - Sonic the Hedgehog review by TH

Where to start. So a lot of praise was given to the film for going back and redesigning Sonic which is great that fans get their voices heard. But sadly while Sonic looks great and has a lot of fun, it struggles to push itself to the next level. The best bit of casting is Jim Carrey (miss Jim and his silly antics) but sadly even he cant quite do enough to make the film memorable. Its decent enough for a watch but would of been good for the script to he a bit sharper and had added in something more for adults who grew up on sonic. Overall worth a watch but fingers crossed the after credit scene opens up a potentially better follow up film.

Sonic the Hedgehog places me in a difficult spot of my conflicts of nostalgia and childish humor. I grew up playing the Sonic video games which became icons of my childhood. I also grew up watching mindless cool-bro shlock like Teenage Mutant Ninja Turtles and still hold an affinity for such a film, a love that I admit is partial nostalgia. The Sonic the Hedgehog movie embraces a little of both by never being a film of anything more than some eccentric action amid quips aplenty. How to process such a picture.

I guess the most positive thing I can say about this film is that it never irritates in its wild adventure format, which is more than I can say for its similar genre fellows of Hop or The Smurfs. No poop jokes (despite one easy fart joke), no overly annoying pop culture references or musical sequences and only a few brief instances of a Fortnite dance. This is not to say that kids film can’t embrace more of this silly referncial and low-brow details but they’ve kinda become so tired through the various lost creature adventure pictures. Sonic thankfully tones down that level of easy humor and instead shifts into tame wit that never reaches a level of being hilarious but rarely aggravates either.

Sonic (Ben Schwartz) is a blue creature from another planet who has that too-cool-for-school attitude his cocky stance has made him known for. His personality befits the Ninja Turtles aspect, his defining traits being that he can’t slow down, has a bit of an ego and adores junk food. Par for the course. Even his backstory of pathos about being alone on Earth is so shoved into the background that the very prologue seems pointless, introducing worlds and characters we will never see again.

Sonic resides secretly in Green Hills, observing the human residents from afar. He’s particularly interested in sheriff Tom Wachowski (James Marsden), a man so bored with his position in a small town he talks to donuts and turtles. That’s okay because so does Sonic. Through a series of mishaps, Sonic is discovered and has to go on a road trip to find his way off the planet. This leads to Tom and Sonic teaming up rather quickly without a lot of chemistry because...the film just needs to get to that road trip story ASAP?

They are pursued on their quest by the maniacal Doctor Robotnik, played in an over-the-top nature by Jim Carrey. Carrey is throwing everything he has into this role, playing up every scene with that electric elasticity that only he can turn on so well. His cranking of craziness to the max makes sense since there isn’t anything all that interesting about Robotnik. He likes machines, he hates people and he wants Sonic’s alien energy to power his robots. Aside from a briefly mentioned story of being a smart orphan, there’s nothing much too him. Thus the character becomes less Robotnik and more of just Jim Carrey being Jim Carrey.

To be fair, there’s not much character to go around. Sonic has simplistic behavior where it becomes clear he’s more impressive for his amazing speed and energy generation. Tom is your standard average good guy just trying to do the right thing. His sister-in-law seems to think his wife should divorce him for reasons that are never made clear though. And there are a few other characters either just there for background and stakes or just a few jokes here and there amid some decent action scenes.

Sonic the Hedgehog made headlines for its first cut of lackluster visual effects that it had to undergo revisions and was pushed back a year on the request from negative reactions of fans. Worth noting is that the studio working on these revisions went bankrupt during this time and everyone was fired before Christmas. Knowing such lack of taking care of visual effects artists makes the end result carry a bitter aftertaste. Was it worth it? For the die-hard Sonic fans, sure, I guess. For everyone else, I doubt there will be much care. It’s a sufficient enough crowd pleaser for kids and fans of the video games but is so lacking in all areas of comedy and character that it’ll become about as forgettable as Detective Pikachu, stepping aside for the next cute CGI video game character who graces the big screen to please fans more with visual faithfulness than anything that’ll ever cross the aisle from console to cinema.