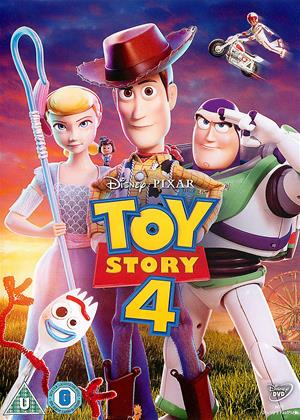 This is a watchable movie, for sure. The thing is, after watching it, I found I had almost forgotten it - unlike the classic first Toy Story which is memorable.

Having said that, there are some great new characters especially a Canadian motorbike man and some scary dolls.

Forky the spork (what used to be called a runcible spoon in Britain in the 19th century, mentioned in the poem The Owl and the Pussycat), is an odd new character but starts off well and is interesting. I liked the first plot point, as usual around the 24th or 25th minute. The entire movie starts strongly, but the second half gets a bit gloopy and romantic really, for me anyway.

I suppose it was predictable in this post-MeToo age that so many female characters would be to the fore, and the child not Andy as in the first, but a cutesy young girl. There is the required ethnic diversity too ticking boxes. BUT the movie is WOODY'S to steal and he does - though I couldn't get Jessie the cow girl's resemblance to Greta Thurnberg out of my head, which was a little disturbing... The ever-dim BUZZ had a funny routine with his buttons too.

The characters have their arcs and develop, if a little predictably., and it's all schmaltzy romantic in the end - which I disliked, but many audiences will go AHHHH! at.

Two questions: 1) why are cats in Hollywood movies, even decent CGI ones as in this, always portrayed as evil baddies (dogs are usually goodies); 2) How can such a big budget movie made by thousands over years have a MASSIVE continuity error in it (look around the 1 hour mark in the case of the antiques shop to see a character just vanish after moving towards Woody).

But a good watch and I enjoyed it. 3.5 stars rounded up BUT not as totally profound as some gushing critics claimed.

Stay watching over the end credits for some funny character scenes.

Very disappointed. Hardly any humour. What were the writers thinking of? I wondered whether it was a good idea to make a 4th one. You couldnt get a better ending to the story in TS3, and this one shows they should have stopped there. Hardly any input from the main characters except Woody who was always the least amusing! If you enjoyed the other 3, dont bother with this one.

The underlying theme is wanting to be loved and belong to someone. Great to see the old characters again, and some new ones. They have even made a character out of a plastic fork. Since DEAD OF NIGHT, ventriloquist dummies have always been scary, and here there are four of them. And they all look like Jimmy Carr!

The film is fast, funny, and beautifully made. I'm glad they didn't stop at 3 films if they are as entertaining as this. If they can keep up the inventiveness, why not go further? Woody and co. are immortal.

My initial thought when hearing a fourth Toy Story film was being made was one of why? You've made a trilogy and a story arc that had reached a satisfactory conclusion for all the characters - nothing more required - move on. Then I read all the 5 stars reviews of the film critics and started to look forward to watching it. I watched it. I'm afraid I had to revert back to my initial thought - why!?

It's not a bad film by any means and it's worth a watch but falls way behind in comparison to previous Toy Story films especially 2. It had some good moments but it just wasn't very funny and there was nothing really new - just a rehash of previous plots. I think I've watched all Pixar films over the years and the standard has been at times incredibly high - Monsters Inc, The Incredibles, Up, Wall-E, Inside Out, Finding Nemo etc. Toy Story 4 feels at lot closer to something like Cars than those marvelous films and that's a real shame.

Entertaining , standard Toy story format . Some new characters and a bit scary for younger children , however seen it all before , and TS 1 and 2 so much better. Forgettable

I really enjoyed this film. Its got heart and funny scenes throughout. The characters both old and new are great too.

The only negative is that some of the main toys are sidelined by the story, however Forky is a great character and deserves a spin off film surely.

As good as the rest! - Toy Story 4 review by HM

Never mind the critics, this is an entertaining, sentimental, romantic, wonderfully crafted film, just like the previous 3. Funny, charming and high level entertainment. You are just going to enjoy this unless you don't want to and even then you may have to!

I wish Star Wars lived up to the first 3 films as this does.

Keeping up the standard! - Toy Story 4 review by CB

What a great series of movies Toy Story has become. Everyone a winner with wonderful characterisations. Forkie in 4 just adorable.

The film a winner alltheway.

Beautifully animated of course but I think we all knew Disney would eventually drown Pixar in a load of PC schmaltz.

So here we have previous male leads demoted to incompetence, all women to be super magnificent in all their life choices and of course a sequel too far since all sequels make money regardless.

Another Toy Story? Hasn’t this story been finished? My doubts were minimal. The Toy Story franchise, after 24 years, has remained one of the strongest animated sagas of all time because there always felt like there was something worth coming back to in this on-going adventure of toy characters. More than a mere comical approach to what toys do when kids are not around, the previous films have been able to find some palpable sense of relatable themes that have only grown stronger with age. Toy Story 4 once more delivers on this aspect that serves as a fitting conclusion and perhaps the best entry in the series.

Everything seemed to be resolved at the end of Toy Story 3 with all the familiar toys being turned over from the aged Andy to the young girl Bonnie. At least for the cowboy Woody (Tom Hanks), all seems to be right with the world. No more toys need to be saved and his purpose seems fulfilled. But then what’s next? A life of being doomed to the back of the closet? This won’t stand for someone like Woody, hoping to preserve his ability to save the day.

He finds the perfect opportunity to prove himself when the Kindergarten-bound Bonnie creates a craft toy of Forky (Tony Hale). Using Forky as a coping mechanism for going to school, Woody decides to take coach the little guy in being a toy. And he’s going to need it as Forky finds himself more akin to being tossed in the trash than a useful toy. For most of the first act, it’s the tale of a new dad, the closest Woody will get to having a son and teaching him the ways of the toy world.

Ah, but that’s not the whole movie, even though that’d be enough for a decent romp of a return for the familiar toys. There’s a longing left for the lost toy of Bo Beep (Annie Potts) who returns to offer Woody a tough choice about the next stage of his life. Also presenting a new challenge is the antagonist doll of an antique shop that wants something only Woody can give if he’s willing to give it up. This is probably some of the darkest territory touched upon for a Toy Story film, not because of any pathos or danger of death but a deeply troubling sense of feeling like there’s nothing left in the next stage of your life, that the world has passed you by. There’s a desperation present that even moves Tom Hanks to tears while recording his part.

Sure, we’ve been talking a lot about Woody but that’s because he’s the most interesting centerpiece of this tale as someone who has always been conflicted throughout the series. He is finally given some closure and a grander sense of peace this time around, even more so than in Toy Story 3 which was more about safety than fulfillment. Still, the supporting cast do an admirable job bringing out the charming comedy of the saga. Buzz Lightyear (Tim Allen) has an amusing bit about trying to find his inner voice, what he believes is his literal internal voice mechanism. New characters such as a plush duo voiced by Keegan-Michael Key and Jordan Peele bring all the energy and there’s plenty of physical laughs to be had from a troubled stunt-bike toy voiced by Keanu Reeves. I also have to mention how astonishing a job Pixar does at taking us into new worlds, despite being familiar ones within Toy Story. Watch how Bo Peep’s adventures take her on a Mad Max style adventure through playgrounds and carnivals while the antique shop seems like a dark metropolis behind the darker corners of the shelves.

While the other Toy Story films seemed to have enough for everybody to do, the fourth entry mostly favors Woody and for good reason. He has the most dimension that it feels like we’re getting the complete end to a brilliant arc of an unforgettable character. In the same way that Logan brought a brilliant finale to the legacy of Wolverine, Toy Story 4 grants a great send-off for this character, feeling more like a triumphant farewell than just another day with the toys. Easily one of the best entries in the Toy Story franchise which isn’t an easy slot to land, but this is just the perfect blend of kid-oriented silliness and poignant storytelling for adults.