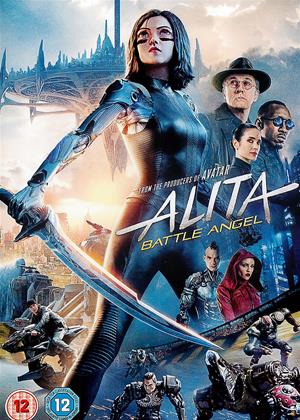 This is genius film making arguably James Cameron's best film since Terminator 2. This is the best sci-fi movie i have seen since Bladerunner 2049 in 2017. Looks amazing but has Robert Rodriguez imprint all the way through it..great fight scenes,imagary..storyline and a superb cast. Absolutely mindblowing.

I really enjoyed this film, and can’t wait for them to make the inevitable follow-up. - Alita: Battle Angel review by Schrödinger's Cake

I loved the original Manga work as a kid, so as ever with a film version I half expected it to be ruined in the translation. Of course, a bunch of the original story aspects are reorganised and renamed to make it work in the film-format, but the general feel is still on point.

The filming and CGI is great, and as expected from the production team, the story plays out at a brisk pace, that’s fun without being difficult to follow.

I really enjoyed this film, and can’t wait for them to make the inevitable follow-up.

Like many films about dystopian futures, this is another aimed at “young adults” reared on mindless combat video games. The plot revolves around another silly game. This time it’s called Motorball – a variation of Rollerball. The main character is also cgi-generated – a cyborg girl who can eat food despite having no digestive tract for waste disposal. Her combat technique is Panzer Kunst, a technique lost since the battle with the URM. No, don’t laugh. It’s based on a best-selling Japanese manga franchise. This film hopes to be the first in a corresponding film franchise. It’s a shame that all filmmakers can think of doing with modern computer technology is making this kind of nonsense.

The cgi is as flawless as you’d expect, but there would be more engagement with the action if the lead character was a real person, like many of the other characters. A cartoon Alita just looks weird beside actors with the calibre of Christoph Waltz, who is as charismatic as ever and the best thing in the film, even if it’s hard to take him as a hunter-warrior. There’s also a city in the sky, and an evil villain in it, but we never get to see more than brief glimpses of them because that’s held back for the planned sequel. But then, nothing about this fabricated universe makes sense anyway.

Story, character, dialogue and drama are all infantile, making for a bland 2hr watch for anyone with a brain. The fact that the filmmakers choose to regale us with a ditty by warbling popster Dua Lipa over the end credits tells you exactly who the target audience is. Even more depressing, on the DVD extras producer James Cameron, once such a great action director, tells us he’s going to spend the rest of his career making Avatar sequels. How has Hollywood come to this?

This film was just superb. Both me and my other half were engrossed from start to finish and couldn`t believe the end!!! (no spoilers).

I would highly recommend this film if you like futuristic sci-fi films.

How did it get in the Trash if it is so Valuable and Advanced ? Never explained.

Fun but Silly Movie. Humans falling in Love with Robots . Everyone on Earth seems to be some kind of Amputee .

The Rich Stealing Organs and Limbs for their own Upkeep it seems . leaving the Poor with incredibly expensive and sophisticated pieces of hardware replacing lost limbs . Highly Unlikely .

I knew nothing about the film before I saw it, apart from there was a CGI girl in it. Found it to be an original entertaining film, amazing effects and good story line. Not sure about the ending, I guess aiming for a sequel. Don't know if that will come now Disney has their hands on it, but you never know.

OK. So the plot is silly, and a lot of the future world does not make sense. However the actors are very watchable. They play their roles straight and no matter how dopey their character is, they do a good job. The visuals are excellence without being garish like Transformers. A decent popcorn movie.

I wouldn't mind Alita as a girlfriend. She would never get tired, and she would be really handy if I got into a fight in a pub. As she said to Hugo in the film.... I wouldn't want to p*** her off!

Infantile, expensive trash - I struggled several times to get through this without turning off - Alita: Battle Angel review by LC

Visually this looks OK, although every frame is dripping in so much CGI (including the main character), that at times it becomes difficult to tell why they didn't just animate the entire thing, especially when the human actors give such hammy and cartoonish performances. All the characters are ludicrous stock types spouting generic cliches, and the entire tone of the film seems to be aimed at a very young age group, but the strange inclusion of a couple of swear words needlessly pushes this into a 12 rating (which I would argue should be an upper age limit). The script is a mess, being both overstuffed (it jumps around numerous plot points without ever really developing most of them, leaving the main villain and his motivation a complete enigma) and ultimately too thin, as the lack of conclusion makes it clear this isn't so much a self-contained film, but just what the studio hopes will be the first part in an ongoing franchise. Young children will find the visual noise and large characters entertaining, but this is otherwise irredemable and empty-headed nonsense.

Considering I love movies set in a dystopian future (this is dystopian-ish) I found this one surprisingly dull. The cgi visuals are excellent, there are some really good actors in it but it failed to make me care about Alita and her streetwise boyfriend. The script is average with some scenes getting pretty cheesy and cliched, and as with a lot of films a little too long. It's worth a watch if you like this kind of thing but that's about it.

For years, James Cameron had been talking about adapting the anime/manga of Battle Angel Alita into a live-action movie. He assured everyone this project was still happening way back in the early 2000s but a plethora of other projects, from undersea documentaries to sci-fi spectacle epics, pushed back this film from happening. I was starting to doubt this would ever happen, even with director Robert Rodriguez involved, given that he had been running his mouth about plenty of projects that didn’t happen (remember when he wanted to do The Jetsons?). And, let’s face it, most Japanese animated properties that make the jump to American live-action tend to fall on their face. Hard.

But, wow, was I shocked to not only see Battle Angel finally come to life but that it’s actually a good film. Heck, I’ll go so far as to say it’s the best American adaptation of an anime, for whatever that merit may be worth. It’s a respectful adaptation in visuals, story, characters, and the grim tone of cyborgs slicing and dicing each other in a dystopian society. In the department of pleasing fans, this one ranks high.

Thankfully the film isn’t drowned in so much lore that a newcomer won’t feel distant coming in cold. It’s a fairly simple story in its construction, despite being one of a futuristic tech, bounty hunting, and absurd bloodsports. Alita (Rosa Salazar) is found in the junkyards of the lower city, only a third of her body remaining. She is discovered by the kindly Doctor Ido (Christoph Waltz), a cyborg doctor that lets people pay him back whenever. Alita is a special case where he gives her a brand new body as she struggles to recover her memory. She slowly starts becoming oriented with the cyborg populated town, learning about everything from how great an orange tastes to the brutal pastime of Motorball, which looks like a more brutal cyborg version of roller derby.

Alita also begins to learn how little she knows about herself and those around her. Everybody is holding back a secret, from Ido in his sordid past to his conspiring wife to a cruel gang leader (Mahershala Ali) to a plucky scrapper love interest (Keean Johnson). But she’ll also soon discover she’s not so innocent or defensive that she can easily take on the whole corrupt system that wants her slaughtered for parts. And so Alita must fight her way through plenty of cyborgs that want to crush her for a bounty, including the giant brute Grewishka (Jackie Earle Haley) and the egotistical shiny bot Zapan (Ed Skrein).

Similar to how Rodriguez directed Sin City, Battle Angel pushes its action scenes as hard as they can in PG-13 for the most ouch-worthy moments. Characters will be decapitated, amputated, sliced in half, or viciously torn to shreds in a manner that will make one react with the same twinge of an R-rated action picture. It’s also a lot of fun when Alita becomes aware of her abilities, confident enough to stroll into a bar full of cyborg bounty hunters and kick every one of their mechanical butts with glee.

The action in the film is intense to be sure but I was just as amazed by how faithful the film stuck to the anime’s darker tone. This is a story that involved mutilation, midnight murders, tragic romances, body parts chopped up, and a dog meeting a gruesome fate. I never expected the film to go this far with the source material but, again, I’m surprised.

Alita: Battle Angel does have a few kinks in its armor with the dialogue being rather base and the actors delivering some performances that don’t exactly sell the emotion of the tougher scenes. But any scene where Alita is taking charge and carving up her competitors, the movie shines as a sci-fi action epic of great visual effects and a story with teeth. When it comes to adopting such a work, this adaptation shines brighter above the rest with a purpose in its conception, a faithfulness to the source, and style all its own.