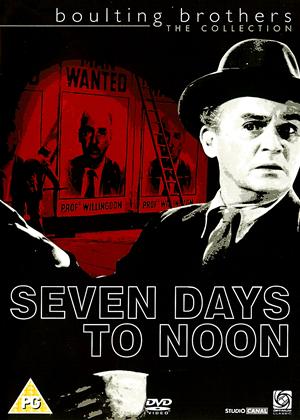 Reviews (1) of Seven Days to Noon

“It will demand sacrifices, but will save lives.” So says the Prime Minister in a broadcast to the nation.

This might sound familiar at the moment but in Five Days to Noon (1950) he is speaking from a Downing Street which did not have a high barricade at the junction with Whitehall. A postman has been able to amble along, a tune on his lips as he puts the mail through that very door one sunny Monday morning in May of that year.

One of these envelopes turns out to contain a letter which, for all its elegant phrases, is not merry matter for a May morning. A mild-mannered, humane scientist (Professor Willingdon, played by Barry Jones) from an atomic station in Wallingford has gone rogue, and threatens to let off a bomb the following Sunday at noon that will take out London from Rotherhithe to Notting Hill Gate - unless the Government gives up the stockpiling of atomic weapons.

From a story by Paul Dehn and directed by the Boulting Brothers, this takes place some years before the familiar CND marches upon Aldershot. That town, though, is mentioned, and many times at that - as we shall see.

Meanwhile, the initial music by John Addison, with an emphasis upon ominous drumbeats, recurs as it becomes clear that Willingdon - his weapon (the UR12) concealed in a Gladstone bag - means what he says. He skulks around the metropolis, favourite raincoat over his arm despite the heat, as the police, with help from Willingdon's daughter, set about tracking him down.

That pursuit is one thing but a great interest of the film is its time, its place - a panoply of it - as, come Thursday, all is underway to evacuate that tranche of the city.

Here we have vignette upon vignette, with allusion to other films, such as Colonel Blimp being outraged by disturbance in his Turkish Bath and salty comments upon the sewers an echo of The Third Man (and the whole set-up brings to mind Val Guest's The Day the Earth Caught Fire a decade later). Here - as rumours spread in seconds of screen time from the clubs of St James's to back-garden fences in Kennington - we find a spiv hustling a queue with the offer of “a nice hotel, near Brighton, twenty quid a night.” A youth is hurried from a pinball machine whose screen depicts a mushroom cloud beneath the title of Atomic Racer. Animals have to be left behind, and they howl; a jewellery thief is shot dead; a soldier holds a bra against his chest for a moment, and makes off with the matching silk knickers (what's all that about?) while searching for stragglers and even, perhaps, the fugitive Professor. Such a crowd finds fleeing glimpses of those who will become better known (Laurence Harvey, Sam Kydd).

All this is wonderfully managed, but central to it are two women down on their luck. One of these, Mrs Peckett (played by Joan Hickson) is a cat-festooned landlady whose newsagent advertisement is answered by the Professor. She informs him, “I won't allow theatricals in the house. You won't believe the trouble I've had with them!” The claustrophobia of this cluttered boarding house is filmed so well - and she turns out to have a point about theatrical types: the Professor is duly put up for another night by Mrs. Philips - a dog-fixated actress still in forlorn hopes of work - who meets him in a pub and, it is clear, would not object to budging up should he chance to stray into her bedroom. She is played by Olive Sloan, of whom one must hasten to discover more.

Good as everybody is in their part, she echoes most of all in one's mind with her frustrated hopes of joining the evacuation - to stay with a friend in Aldershot. She makes that Aldershot quest as resonant as Pinter's caretaker would do of Sidcup.

One of the great post-war British films, Seven Days to Noon reveals more on every viewing - although one has yet to see the Inspector's tie slip.