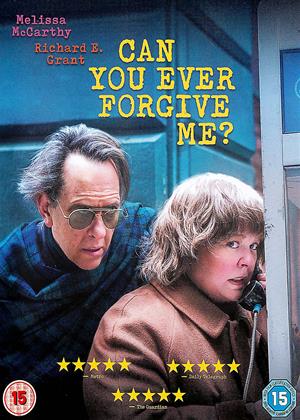 Rent other films like Can You Ever Forgive Me?

Reviews (14) of Can You Ever Forgive Me?

Entertaining and Intelligent - Can You Ever Forgive Me? review by JR

Jack, Lee's drinking buddy and accomplice calls Lee ' a horrible c***'. And she is. The only living being she is capable of showing love towards is her cat. She is a misanthropic drunk with criminal tendencies, but the film makes you care deeply about her and Jack. The film is based on Lee Israel's book about how she came to be convicted of forgery; and in the hands of scriptwriters Nicole Holofcener and Jeff Whitty, is witty, intelligent, entertaining and melancholic with first rate performances by Melissa McCarthy and Richard E Grant.

12 out of 13 members found this review helpful.

Interesting, sad, beautifully made but by no means a comedy - Can You Ever Forgive Me? review by PR

Amazed that this has been marketed as a comedy. It really isn't. It's beautifully shot, excellently acted & the soundtrack is absolutely lovely. It's evocative but very melancholy & one part actually made me cry.

So don't watch this expecting anything upbeat or LOL - it really isn't.

Not the comedy we were expecting to see - Can You Ever Forgive Me? review by EP

This film starts with Melissa McCarthy portrayed as a pathetic has-been writer who is too belligerent to conform to her agent's ideal of an ace biographer.

It then morphs to a hard-up writer in desperation (quite sad) considering any way to survive in New York whilst looking after her cat.

She then meets an old queen (Richard E Grant) who seems sparkly eyed and full of fun but is also hard-up and boozing with no fixed abode.

The 2 of them carry on about forging letters from deceased famous writers for cash.

It is mostly pathos comedy and there are few laugh out loud moments. It is generally well acted by the main parts but in a you know what your getting kind of way.

I was slightly let down by this film as I had higher expectations for the comedy element but if you want to see a bittersweet comedy drama then this might be for you.

Genuinely moving, Bitter-sweet Tragi-Comedy about a Lonely Desperate Author in 1990 New York - Can You Ever Forgive Me? review by PV

This is an excellent bitter sweet drama - a tragi-comedy - which I thoroughly enjoyed. In fact, having watched this I think Melissa McCarthy should have won the Oscar for best female in a lead role and not the massively over-rated Olivia Coleman queen performance in the massively over-rated 'on trend' women-only-focused The Favourite. It really is a stunning performance from Melissa McCarthy, and actress I had not heard of before.

I never really like Richard E Grant in anything though as he always plays - Richard E Grant. I dislike the way modern movies all seem to need the camp outrageous sidekick of the black sassy woman too (thankfully absent here).

Based on a true story but a really believable ones. Writers really do struggle - according to the Society of Authors the average salary of a professional author member if around £11,000 per year, down £1000 in a decade, and most author members of that society earn £5k a year or less. So this story is utterly believable. Many writers will relate to it and the world of agents and rejection and awful jobs being treated like dirt - and drinking of course!

Genuinely intelligent and touching as a movie, which does not happen much in Hollywood.

It would have been 5 stars but for the OTT performance of Richard E Grant and the way the film becomes more serious as it goes on and loses some warmth and humour BUT congratulations on the script for making us like someone who was not really a likable person and lived a very lonely life of great suffering. Oh and I loved the cat (no spoilers BUT I knew what was coming when I first saw it!)

This movie reminds me of, I think, a TV drama of a man who faked paintings for decades ('sexton blakes') as he called them - a BBC2 drama from years ago. You have to admire anyone who can pull it of, I suppose AND wonder how many fakes are out there, as yet undiscovered...

Richard E makes it to 3 - Can You Ever Forgive Me? review by NC

Give it a 3 as Richard E is a good actor all day. Had some poor films, but few poor performances. Mel a lot better than her normal offering.......a sort of female Jack Black.

Great story and marvellous character study - Can You Ever Forgive Me? review by Champ

This is that rare movie, one that is very enjoyable dislike none of the main characters being likeable. It's essentially a two-hander, with the leaders brilliantly portrayed by Melissa McCarthy and Richard E Grant. Both characters have a complex and involved back story which powers their actions, and neither of them did I identify with, or even particularly want to meet! But the story of the film captivated me, and I really wanted to see where it went. It's based on a true story, and having really enjoyed this film, I know want to read the detail in the book.

Winning biopic - Can You Ever Forgive Me? review by Alphaville

Biopics rarely reach the level of cinematic masterpiece, but there are some engaging ones around at the moment (Colette, Stan & Ollie) and this is another winning one. Melissa McCarthy plays a down-on-her-luck writer who begins to forge letters from literary greats to make money. It’s a gentle film with a plot that becomes increasingly involving, has great dialogue and is well-acted by McCarthy and Richard E. Grant, in his best part for ages as her louche drinking buddy.

Oscar Nominations Correct, But Somehow It Misfired - Can You Ever Forgive Me? review by AA

Two very good acting performances worthy of the nominations they have garnered, but for me the film as a whole misfired and at times I found it lacking in cohesion.

Great stuff - Can You Ever Forgive Me? review by AN

Enjoyed everything about it. An intelligent, grown-up and unsentimental treatment of a real-life story that is in some ways stranger than fiction.

Great acting - McCarthy brilliant as the misanthropic writer frustrated and hardened by life's misfortunes, and Grant as the volatile and ageing man of the streets. Loved it.

Yes, I can forgive you! - Can You Ever Forgive Me? review by BE

I am not sure this film should be classed as a comedy as it is more morose than funny.  I was also surprised that I felt any empathy with a woman in her middle years undertaking criminal activities to pay her way in life. The perfect acting from Melissa McCarthy and Richard E. Grant defied you not to become emotionally involved with their screen characters.  I doubt this film would have been quite so enjoyable had they not been in it.

Satirical dip into New York's literary set - Can You Ever Forgive Me? review by JL

Delightfully original, beautifully written and directed, this film is both witty as hell and steeped in pathos. Sensitively acted by two of our best character actors as well.

Can You Ever Forgive Me? review by Mark McPherson - Cinema Paradiso

Lee Israel’s crimes were somewhat small and bereft of smarts when it came to getting away with it. Thankfully, her biopic has been given a certain humanity in her desperation as a writer. It’d be so easy to contort her tale into a silly heist, especially considering the eccentric talent assemble for such a picture. But Can You Ever Forgive Me sidesteps such easy storytelling for something more heartfelt without overdosing on the sincerity. Something tells me Isreal would hate that kinda heartwarming writing.

Mellisa McCarthy plays Lee as a female author who can’t quite get her life together in 1991. She resides in a dirty apartment with her sick cat, her evenings spent reciting old movies on television she has clearly watched multiple times. She’s lacking in funds and hasn’t sold any mesmerizing writing in ages. She hears about Tom Clancy getting a huge contract and explodes. Her agent tells her that she can’t give Lee such a deal because she won’t write anything and refuses to go on tours. She needs a hit manuscript and fast.

Or she could take the alternate route of faking long-lost letters from famous writers that she can sell for an extraordinary amount of money. And since inspiration is in low supply, Lee favors the path of forgery. She becomes rather good at it as well, making sure the writing, paper, signature, and even the typewriter are perfect. It’s not until she starts hearing about authenticity experts that she becomes worried. By the time she starts literally stealing documents, she’s shaken. And by the time the authorities are after her, she’s a mess of emotion.

McCarthy’s performance in this picture is one of her finest. She’s a collected mess of sorts as the perfect storm of a woman just desperate and brash enough to see the headlights heading towards her. She wears her heart on her sleeve, letting all the bitterness, joy and sadness flow out of her when life throws her hardship. Part of the joy mostly comes from her gay best friend Jack Hock, played by an exceptionally spry Richard E. Grant who can light any room on fire with his smile. He’s inept as Lee is at this forgery game but still gives it a go and sticks by his best friend with a constant smirk. When the heat becomes high and Jack must make sales, he’s so giddy and impressed that he ever got away with it he nearly squeals when showing off the cash. They have plenty of cute moments together and it’s brilliant to watch them bicker and chortle at the games they play.

Can You Ever Forgive Me pulls a rather surprising trick out of its hat by not only making Lee seem like an understandable criminal but a lovable one as well. McCarthy and Grant play such sincere social misfits that it’s hard to be mad at their blissful ignorance. When the two discuss their fluctuating poverty situation, Jack regales Lee with his strategy swiping toothpaste from the store without the store knowing. He caps his story with his technique being a win-win, though Lee will correct him that he doesn’t understand what he’s talking about. The same goes for Lee in how she believes she can fake her way into paying bills. But damned if there’s not a moment of brilliant chemistry between the two that makes one hope they’ll get away with a crime they had no hope of pulling off for a long time.