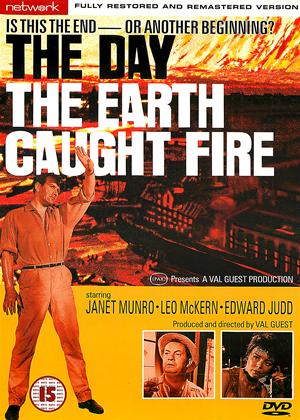 Rent other films like The Day the Earth Caught Fire

Reviews (4) of The Day the Earth Caught Fire

Filmed in black-and-white with tinted yellow/orange opening and closing sequences, this is a superb early 1960s period sci-fi disaster film. Sharp dialogue (the film won a BAFTA for Best Screenplay), good acting (some of it isn't acting - the recently retired editor of the 'Daily Express' played himself), topical even today (end of the world through climate change, anybody?).

The story goes like this: simultaneous nuclear tests at the North and South Poles tilt the earth on its axis and cause extreme change of climate. Later it turns out that the orbit of the earth has also been changed. That's clearly improbable, but the story is told through the eyes of individuals whose lives are affected by the changes and that's what makes it gripping stuff. Humanity is very fragile.

The story is built around a reporter (played by Edward Judd) working for the 'Daily Express', his colleagues (including the always excellent Leo McKern) and the girl he meets at the Met Office (Janet Munro). The glimpses of the 'old' Fleet Street and the workings of a real-life newspaper of the period give the film a realistic feel (although the Canadian accent of Bernard Braden who plays the news editor seems a little out of place). Period details abound: typewriters, carbon paper, telex, Roneo copying machines, printing presses, smoking, Morris Minor cars, a working Battersea power station, Battersea funfair with wooden roller coaster, police in 'proper' helmets and uniforms, CND rallies, boys in short trousers, even the nuclear bomb tests themselves - all give a glimpse of a world gone by, but in this case place the film firmly in a period of near history.

The film ends on a downbeat note with a countdown to a corrective nuclear explosion - and a nicely ambiguous ending is provided by newspaper headlines. Superb stuff - 5/5 stars - highly recommended.

[Aside 1: In its day this was X-rated and was regarded as quite risqué, with a brief glimpse of Janet Munro's chest :) I remember sneaking in to see this at the cinema when I was far too young for an X certificate film. The DVD also appears to be a direct transfer from film, as the original British Board Of Film Censors certificate is still included.]

[Aside 2: My copy of this film came in a Classic Sci-Fi Collection box set which when I bought it was excellent value - you can probably pick it up second hand on eBay]

When I first saw Val Guest's science fiction classic, it was the witty script (Wolf Mankowitz) and the energetic thrust and parry of the blokish Fleet Street setting that made it such a great film. Followed by the contemporary doomsday payoff of the cold war powers' nuclear escalation as it leaned into the apocalypse.

But now, it is the magnificent foresight (a coincidence I suppose) of its theme of global warming meltdown, as mankind looks to scientific solutions for political failures. Which now makes it seem groundbreaking.

The film focuses on a daily newspaper (based on the Express) as it covers the last few days of life on earth in a dystopian London, and in particular on Edward Judd's recovering alcoholic and recently divorced hotshot reporter. In a way, the film is a metaphor for his unbalanced, ruined psyche. Judd and meteorologist Janet Monro are properly sexy and share great chemistry.

The locations and cinematographic atmospherics of an unravelling, burned out world are magnificent, particularly the tinted widescreen sunrise at the start of the film. One of the best sci-fi films ever made, particularly in the UK. But, much more than that.

I would like to start with Arthur Christiansen, who was the editor of the Daily Express until 1957 (4 years before the film was released). He may have been a good journalist but he is a dreadful actor. If you tried to act badly it would probably not be as impressively awful. Unfortunately the painfully bad acting ran through the cast with the lead actor Edward Judd (who is he) making a ham of it. The only actor with any credibility was Janet Munro (who later sadly died at the age of 38). Even Leo McKern was not as good as usual. John Barron plays a minor role very well (later to become CJ in Reginald Perrin).

With the negative points out of the way, a great sci-fi with a nice plot based on the effect of knocking the earth out of its previous orbit. It is a beautiful film in every sense with inventive cinematography.

Time was when Fleet Street was in Fleet Street and newspapers dealt in news. True to such cinematic form, The Day the Earth Caught Fire (1961) has several scenes of the latest issue clattering through the presses and the front page filling the screen with a thud as events unfurl. In this case, with an original script by Wolf Mankowitz and director Val Guest, it turns around the contemporary fear of the Bomb. It has not killed anybody recently but, as two Daily Express reporters discover, several tests of it have tipped the planet off the axis which brought and sustained life up and under these shores.

This is no science-fiction extravaganza. The effects are minimal but well used, and, as is the newspaper, all is in black and white. Except the characters. Here are people, in all their variety, each containing multitudes.

Leo McKern (who recalls that it was all made in an astonishing five weeks) is the newspaper's science correspondent and Edward Judd a reporter forever on the trail of stories while brooding on the divorce which means he rarely sees his son. Guest re-created the Express offices – and used the real-life staff member Arthur Christiansen to the play the Editor (as he does capably enough). Along the way Judd meets Janet Munro, a Government source, who also provides him with sultry distraction in her small flat and at the funfair in Battersea Park. Guest was always very good at making use of locations, and here all the more so as that tilt in the axis brings floods and cyclones while the Prime Minister intones from Downing Street – and, for a few seconds, a helmeted Michael Caine attempts to direct panicking drivers.

All of which means that it has as much contemporary relevance as it did in that period when Bertrand Russell addressed crowds in Trafalgar Square. With the climate emergency sending the planet out of kilter by other means, here is a drama as troubling, and involving, as ever. A gem which gleams from its sepia-toned opening and for the following ninety minutes.