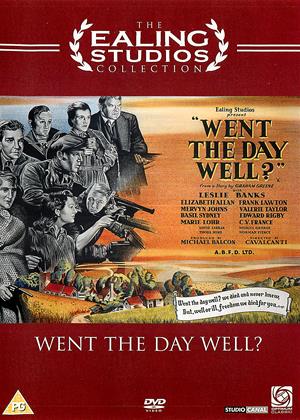 Exciting propaganda of German platoon which takes over a small English village as a base for invasion. Villagers fight back! Incredibly effective and inspiring, for what is really a public information film!

Although this film opens after the war as a villager stands in a churchyard and recalls something of events a few years earlier, in fact the film was made and released in 1942.

Based on a story by Graham Greene which he collected only towards the end of his life (though it had appeared, strangely enough, in a children's anthology), it was directed by Brazilian-born Cavalcanti whom he much admired. Set during the Whitsun weekend of 1942, it tells of a sleepy village (named Bromley End, and filmed in Turville) where its array of inhabitants found themselves at the vanguard of a world turned upside down. Here we have characters ranging from a gentle, strong-minded vicar to a bedraggled poacher who is passing on the tricks of his trade to a very young Harry Fowler. Scenes range from a village store, and telephone exchange to a Manor House lined with pictures along its twisting staircase.

Among the cast are many canny women (among them Elizabeth Allan and Thora Hird), who, as events unfold, come increasingly to the fore, even the fire: there is some startling violence here, all the more effective as it is not drenched in blood but of a piece with a film in which there is continual use of light and shadow, whether by night or day, inside or out. The cinematography is wonderful. As James Agee wrote in his review when the film was duly released in America some while later (mid-1944), he thought the best of it was "in its relating of the people and their action to their homes, their town, their tender, lucid countryside. As the audience watches from a hill, with the eyes at once of a helpless outsider, a masked invader, and a still innocent defender, a mere crossroads imparts qualities of pity and terror which, to be sure, it always has, but which it seldoms shows us except under tilted circimstances. And at moments, when the invaders prowlingly approach through the placid gardens of the barricaded manor in the neat morning light, the film has the sinister, freezing beauty of an Auden prophecy come true".

For some years, even decades, the film fell from sight, even though there is much in it of a piece with eternal Ealing delights. It is now well established as a classic of English film making, one which time and again takes by surprise even those who have already seen it.