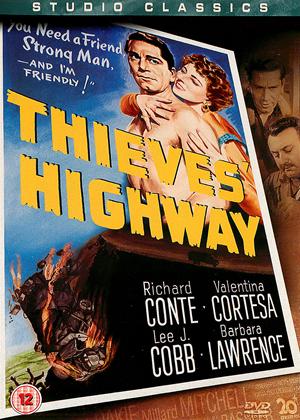 This is not far off being a superb film noir. Unfortunately it has two major defects. The first is Richard Conte. He's not much of an actor, a deficiency he tries to make up for by being incredibly manly; the trailer actually spells out to us in letters which on a cinema screen would have been enormous how VIRILE he is! I suppose he is, but he's so busy being dead butch that he just comes across as smug. He also appears to be extremely stupid. See how dense he looks in most of those stills? I'm not surprised he ended up playing the kind of supporting characters who weren't required to make the audience like them, because he's lousy at it.

The other problem is a weirdly schizoid plot. Although it starts off being about long-distance truck-drivers, the hero soon reaches his destination and the rest of the film concerns his feud with an evil greengrocer. (Yes, really!) Except that there's another character who literally gets left behind by the main plot, and almost seems to be in another unrelated movie we occasionally catch glimpses of which is much more light-hearted than the one our hero is in, until the two plot-threads come together at the end, and characters who are at least borderline comical very abruptly find themselves in the kind of film where people die in nasty ways.

Valentina Cortese as the tart with a heart is so much better than Conte that I wished the movie had been about her struggle to free herself from a lifestyle she hates with the help of a tough but gullible trucker she at first cynically manipulates but soon comes to genuinely care for. Unfortunately it's about him and his quest for revenge, which, although he has a very compelling motive, doesn't make the slightest sense because his cunning plan seems to consist of tempting the baddie to blatantly rob him, thus making it OK to beat him up. Actually I'm not sure he has a plan at all, since he wanders around being repeatedly swindled and duped until something which the villain wasn't in fact responsible for finally makes him angry enough to take decisive action.

The supporting cast are extremely one-dimensional. Lee J. Cobb's cheerfully insincere and utterly despicable fruit and veg wholesaler gets away with it because Cobb's trademark style is to play everyone much larger than life. But most of them are wacky stereotypes whose involvement in genuinely horrible situations feels very wrong indeed (it doesn't help that one of them looks incredibly like 50% of Ant and Dec). And some of them are more than slightly annoying. It's about halfway to being a truly great movie, but it doesn't seem to quite know what it's about, and ends up getting into a bit of a muddle.

Such dialogue shows that we are in noir territory - in this case, the countryside outside San Francisco with truckloads of apples en route to a wholesale market under the thumb of a chiseller who feels affronted at being asked to pay for the produce he sells on to willing customers.

Trucking - Hell Drivers, Duel - lends itself to the movies (would that the English version of They Drive by Night would re-emerge and which inspired Graham Greene to extol its depiction of "monstrous six-wheeled lorries plunging through the rain" of the Great North Road). Thieves' Highway was adapted by A. I. Bezzarides from his novel, and a love element does not make this fruit soft in any way. On the contrary, Valentine Cortese (who appeared years later to memorable effect in Truffaut's film-about-a-film La Nuit Americaine) is an exemplar of the sultry. Sizzling are her scenes as something of a hooker sent by a vegetable wholesaler to divert an Army veteran (whose father has been handicapped by that wholesaler).

If, as the previous reviewer here suggests, it is a movie of parts that do not quite gel, that does not matter: those parts are so strong and it all moves at such a pace that one is carried along. These are ninety minutes of your life you will not get back - and be glad they were so well spent.