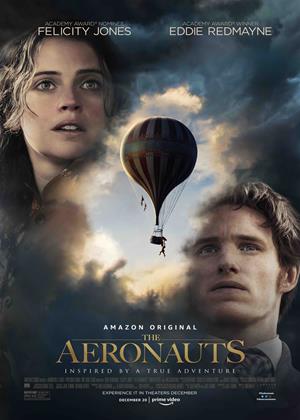 Reviews of The Aeronauts

It becomes quite apparent halfway through The Aeronauts that the thrill is more in the high-flying survival staging than the historical aspect. It’s a revisionist picture that aims to tell a more intense tale of explorers venturing into the cloudy unknown. There’s a unique excitement in trying to fathom an era where what awaits beyond the blue skies seems intriguing, just waiting for discoveries to be made. But as with most survival pictures that soar to such heights, akin to that of First Man, the real meat of the picture becomes less about whether the risk is worth is a danger to the individual and whether or not our two heroes will land before they freeze to death.

Two explorers set off to record new records in how high a hot-air balloon can lift. Eddie Redmayne plays James, a scientist that is bursting at the seams to prove he can go higher than any scientist before him. He manages to convince enough people to pay him for such a stunt but they need a bit of flair as well. This is where Felicity Jones playing the more eccentric and humane Amelia, making her introduction by adding a dog to the equation. Thankfully, the dog will parachute out as another stunt and it’s a good thing he ditches early. The ride will not be kind.

After some mild banter and character building as the balloon slowly makes its ascent, the real terror sets in. The higher they go, the colder it gets. The less oxygen present, the harder it becomes to maintain one’s composure. This is where Amelia and James clash about how much further they should go. Amelia thinks they should stop but James argues bitterly that they should continue. Is he that committed or is the lack of oxygen affecting his brain?

Director Tom Harper has a real eye for directing such excitement in such tight places. His camera with extra depth makes the interior of the balloon’s basket not only seem large enough that we can place ourselves in the action but also has an off-putting nature that evokes a certain unease. The camera gets closer as James becomes more unhinged and Amelia debates how far she should let him go.

By the third act, the film is pretty much an edge-of-your-seat action picture, where James passes out and Amelia is forced to find a means of descent. She climbs ropes, attempts to poke holes atop the balloon and dangles for her life trying to save the day. Even when she finally gets the balloon to lower and James recovers, another threat presents itself in trying to land without speeding into the ground at a lethal speed. This is such a strong bit of filmmaking ala Gravity that it nearly makes us forget about the snoozy period piece of the first act, building up revisionist characters with little more than grunt work to make us care if Amelia and James will ever live to see the Earth again.

The Aeronauts is certainly a stronger survival adventure than most of this genre, considering its historical setting. That being said, there’s still a bit of baggage in its initial ascent that could be ditched to speed us more quickly towards the more engaging aspects. The film is still engaging enough as a whole to stick with the voyage but certainly takes its time trying to those flames to peak heat.