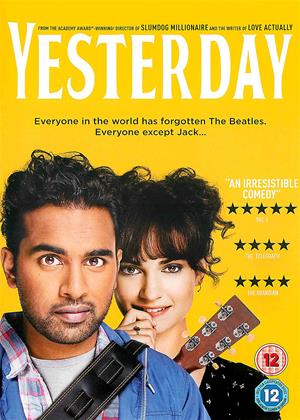 Interesting film about a struggling musician who after a global power surge blackout becomes the only person in the world to remember the classic songs written and sung by the Beatles, and capitalises on it.  Got slightly bogged down for me at about 3/4 mark of the film but redeemed itself for a fabulous joyful ending .  Great performances from the lead actors and a host of well known actors in cameo roles which were perfect for them!

Any movie full of classic Beatles songs will be good, even if the film itself is awful. Hard to get those rights (owned now by Sony) but if you can, you;re away. Richard Curtis is a big name, so could.

One point: some critics call the idea for this film 'brilliant and original' but it isn't. I saw two outlines of screenplays in 1995/6 which imagined a world without Beatles music - differently done, but essentially the same idea. A fantasy WHAT IF alternative reality genre - a bit like FATHERLAND, IT HAPPENED HERE, or WENT THE DAY WELL all about imagining what would have happened if the Nazis had won WWII.

Anyway, it's a decent idea and well-executed, especially in the first half of the film. Later on, as is typical with Richard Curtis films, it gets suffocated in slushy sludge and sentimental emo-porn romance. Every single Richard Curtis is the same - a man wants a woman; she is not sure and/or rejects him but eventually comes round and they end up together walking off into the metaphorical sunset. Every SINGLE Richard Curtis movie has that plot.

Some great jokes especially at the start - and I liked the main characters resistance to 'going back into teaching'; his potential girlfriend and manager says he shouldn;t because h'll end up putting all his energy and imagination and talent into the kids he teaches instead of his songs. YES!

A point re the casting: Ed Sheeran does just fine in a cameo (though I feel his very derivative song writing is over-rated). The main character played by Himish Patel can sing well but lacks any charisma at all so I struggle to believe he can be a worldwide star.

I think Richard Curtis was very much criticised in the past for not having many ethnic characters in stuff like NOTTING HILL so he has perhaps gone too far the other way here. He just about gets away with it re the main character. However he and his parents do seem rather like white characters who have been 'coloured in' to tick the pc diversity boxes. His parents played by real-life spouses the ever-annoying Meera Syal and Sanjeev Bhaskar are absurd. For a start, Lowestoft and Suffolk are all East Anglia are VERY white areas of England, so very few Asians AND I promise you, no Asian dad called JED with a strong Suffolk farmers' accent like the dad character. Find me an Asian man called JED who speaks like a farmer and I'll buy you curries for a year! I think if we have that main character realism would dictate he's white or maybe Asian and adopted by a white family. The deliberate diversity box-ticking annoys.

I liked the character ROCK - the drunken layabout roadie. He's a lot of fun.

I loved the early scenes at the warehouse and local TV - having done local radio and TV myself, I laughed inwardly at all that!

The subplot with 2 others is a bit odd, but then the fantasy plot here is so full of holes it could be a Swiss cheese - best just to sit back, relax and enjoy the ride and the classic Beatles music.

I found the ending annoyingly unbelievable, but it's neat and circular, and most will go AHHHH in all the right places. I find I tend to go UGHHHH at all the gushingly sentimental parts though...but that';s just me.

A flimsy but enjoyable film BUT not original. There is a short film featuring John Lennon working in a Job Centre because the Beatles didn;t happen too - cannot remember the name. In real life, John Lennon's dad and grandfather were in the merchant navy and he would have probably joined too if the Beatles hadn;t happened (and Paul would have tried his luck as PAUL RAMON and become a teacher if that failed). John Lennon was a cat man though (the Lennons had a cat called TIM when he was a boy) not a dog man. A nice scene with him though in this, though I don;t believe he would NOT have a guitar around somewhere.

It may be that I am simply the right age to enjoy the music so much but there is plenty else to enjoy in this feel-good movie. The basic device of the main character being the only one who can remember the Beatles following a mysterious global power glitch sets up an enjoyable romp. There is love interest of course, will they won't they, with the main characters. The main character is conflicted by his chance in the spotlight and how will he react?

Great performance by Himesh Patel and to play and sing so well really helps the film along.

One of those films where you think - “how did this ever get made”. Well cast but poor script. Not that enjoyable. And pretty awful in parts.

The film has an interesting premise about what would the world be like without any Beatles music but ends up turning into the kind of romantic drivel that Richard Curtis is known for. However, in previous films he has had the actors, well Hugh Grant to pull it off, here he has a charisma free zone cast and a complete lack of humour throughout. The songs are good though. Wasted opportunity with a plot with serious holes.

No warmth, no spark - Yesterday review by PT

With the history behind Danny Boyle and Richard Curtis, this should have been a gem, but zero chemistry between Lily James and Himesh Patel, not a single character you can really like.

Bless Ed Sheeran :-), the bright spot in a dull film.

This is an archetypal "high concept" movie - what if the Beatles has never existed, but you could remember their songs?

The concept is developed very nicely, and the cast is very good. But I found a couple of ideas jarred against each other - one where on first hearing the song is immediately identified as a work of genius (as when Ed Sheeran first hears "Long and Winding Road") vs where the listener just treats it as a nice new song (as in when Jack's parents first hear "Let it Be"). By the end it was assumed that everyone in the world immediately knew that all the songs were exceptional, which I just didn't buy (and I still don't think Obladi Oblada is anything special myself!).

And the love story was just frustrating. Ellie is both lovely and beautiful - would Jack really never have imagined her as a girlfriend?

The criticisms stop this being a great film, but its still good, and good fun. It just could have been so much better. It's The Byrds, not the Beatles :-)

found it quite boring - Yesterday review by cp

Fun idea of a singer who wakes up after an accident to find that no-one in the world has any memory of the Beatles or their music. Harmless fun.

Enjoyable revisit of Beatles back catalogue - Yesterday review by SE

The concept of the film is a bit bonkers but once you have swallowed it, you can lie back and enjoy the meaningless but enjoyable ride.

Himesh Patel is an engaging actor and a pretty good singer too. Lily James is of course great eye candy but doesn't bring much of weight to the production.

A good summer relaxation, escapist, feelgood film with no danger of ever having to engage your brain or plumb the depths of your emotions.