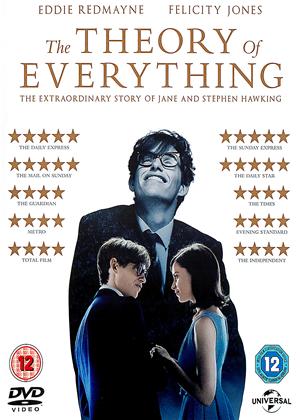 Reviews (11) of The Theory of Everything

acting of theatrical quality - The Theory of Everything review by CH

Whilst it is no secret the the film is based on the book by Jane Hawkins... and it carries an emotional tone throughout the film as a result of her own story and the dedication of the actors who play their roles splendidly.

There is a but.... This feels like snap shots... the sense of journey and ironically time is eluded to but not really realised...

whilst I thoroughly enjoyed the film and the acting was superb I feel... to me anyway... a bit like the King's Speech great acting but missing the heart of the story.

so why four stars? Because, there are brief moments when I felt overwhelmed with sadness and loss and for that emotion... which was conveyed in such a sincere way that's why I gave it 4 stars.

Disappointing, Irritating, Inaccurate, Over-rated. Americanised Biopic - The Theory of Everything review by PV

One thing REALLY annoyed me about this film: the use of modern and American language spoken by characters in the 1960s and 70s. People in the UK did NOT say 'all good' in 1963, and nor did they say 'I like to shop' (they said I like shopping). Pronunciation too - the stress on formidable is on the first syllable NOT the Americanised stress later on in the word. These things matter!

But then, this is aimed squarely at a USA audience. Hawking is world famous (largely because of his disability, it has to be said) and a household name. Thus the movie serves up exactly the sort of 'becoming a winner against the odds' story the Americans so adore.

The cinematic tropes are American too - yet again, the slow handclap rising to huge applause one sees in FAR too many Hollywood movies (and accurately satirised all those years ago in Comic Strip's The Strike). And of course the Americans love idea that all Brits are posh and upper middle class like David Niven (or Colin Firth, Daniel Day Lewis, Eddie Redmayne) and they adore the royal family so get the scenes in the palace in quick at the start of the film. UK film makers (and TV drama makers) pander to that international taste - and the UK film/TV industry is much worse for it too.

Did Redmayne deserve an Oscar? Well, I have long thought that 1) Academy voters vote for the person portrayed perhaps more than the actor doing the portraying, and 2) the Academy voters always vote for any actor playing someone with a disability especially if they also age (eg My Left Foot, and this years Dementia best actress Oscar too, and Matthew M for Dallas Buyers Club - another mediocre movie - when Leonardo di Caprio should have been a clear winner for the Wolf of Wall Street).

So all in all, not a bad movie but now a great one either. Hence, 3 stars max.

My right foot - The Theory of Everything review by NC

Good acting but that is it. - The Theory of Everything review by JD

Eddy Remayne was rightly lauded for his amazing portrayal of Steven Hawking as he became increasingly disabled with Motor Neurone Disease. The film is otherwise full of plot holes and inconsistencies. I understand that the film is actually about Jane Hawking which may explain some of these, but I agree with other reviewers that this seems to be a film reaching out to an American market. As I recall they even refer to his disease by the American term ALS.

Very moving, but.... - The Theory of Everything review by KJ

simply not scientific enough for me. Would love to have learned more about Hawkins the Scientist rather than the disabled man. But deeply touching never the less

Good watch - The Theory of Everything review by JJ

Well I liked it, enjoyed knowing the story of the life of this man with all he had to face & the women whome loved him so much wanted to be with him no matter what, to know about his family & friends. Great acting & actors enjoyed it, recommended.

THE THEORY OF EVERYTHING - The Theory of Everything review by SM

A brilliant film that I sometimes found difficult to watch, very emotional. Eddie Redmayne was amazing.

I loved it! - The Theory of Everything review by ST

We really enjoyed this film and the fact that is was based on a true story was a bonus. I wish I'd paid a bit more attention when the man was alive but science is not my thing, it blows my mind!

Overview of a man with motor neurone disease not a biopic of Stephen Hawking. - The Theory of Everything review by Bullitt 68

Knowing very little of Professor Hawking's life this was interesting and easy to watch. It was nice to see such a loving, happy man before his diagnosis and that he remained the same mischievous character throughout his life. However I find it difficult to believe that an intelligent young man with such lust for life was always so calm and accepting of his disability. What made him so positive when many other men would have given up 'living' long ago?

The film hardly demonstrated his achievements or his work ethic and determination despite such a debilitating handicap. Instead it focused on the family man but, seemed afraid to peel back too much of his personalty so we felt that we knew much more of the man.

I fear if the world did not know who Stephen Hawking was, and this production was about someone else, then it would not be received so warmly; it relies on us to fill in the gaps in his life or to simply ignore them whilst we wear our rose tinted spectacles.

Excellent! - The Theory of Everything review by VB

The acting was the best it could be, especially Eddie Redmayne, the story well told, and overall well portrayed (that is, the settings, and 60s portrayal) . I think my husband was a bit reluctant to watch this film but he was very happy with it, it surprised him. We thoroughly enjoyed this film.

I don't agree with another person who says that Oscars are often given to people portraying people with a disability as it somehow fails to acknowledge the talent of the actor. I still haven't seen My Left Foot, but found Eddie Redmayne's work excellent. Having said that, if you are able-bodied it must be very hard to stay in a heap and portray increasing disability as in this case or permanent disability (I think, for My Left Foot).

The Theory of Everything review by Mark McPherson - Cinema Paradiso

There are some lives that are extraordinary enough to warrant a biography picture. Stephen Hawking is certainly a man worthy of such attention for all his many contributions to the scientific community. Looking back on his life, he also had enough struggles to warrant a dramatic story. But rather than dig deeper into the man to learn more about his accomplishments and plights, The Theory of Everything merely presents Hawking’s life in heart-tugging nuggets rather than an engrossing narrative.

The movie begins during Hawking’s college days as a plucky student with ambitious ideas and his eye on a girl. When he isn’t burying his nose in books and chalkboards, he takes his girlfriend out for thought-provoking conversations and goofing off at the fair. Everything appears to be coming up Stephen until his dreaded neurological disease takes hold of his life. Initially given two years to live after the unfortunate discovery, he secludes himself and gives up on his research, but his wife pushes him forward. The more his body fails over the months, the more he becomes driven to make his mark. His life proved to not only extend far past the expected point, but managed to be a very fruitful and joyous experience.

Rather than take the angle of focusing on one area, The Theory of Everything wants to be all encompassing. It wants to present Stephen’s controversial theories and ideas as seen through his eyes by giving a glimpse of his brain’s eureka moments. It wants to showcase his family life that appears to have survived quite well in the face of his disability and his affairs. It wants us to feel all the pain of the neurological disease that cripples him so.

But by presenting all of this in a two hour movie, we don’t get a chance to explore much of anything. Hawking presents his theory to the board who promptly give him a PHD. Not long after, we whip away to him struggling up the stairs on his own. And before you can even see the anguish on his face, we’re already on to Hawking’s wife growing irritated with his care. No time to harp on that! It’s time to watch Hawking play with his kids while the music swells and the picture goes glossy.

The only aspect pushing this production past the realm of a made-for-TV movie is the noteworthy performances, tailor made for an Academy Award. The role of an aging Stephen Hawking could have easily gone the wrong way, but Eddie Redmayne is able to bring just the right amount of character. If he went too far with the disease, it would be inappropriate. If he did too little, it would be seen as a worthless performance. Redmayne nails his subject with an uncanny level of perfection which will hopefully prevent Lifetime from taking a whack at making a Stephen Hawking TV movie.

What may be most irritating about this film is its avoidance of any developing drama. The divorce Stephen has with his first wife is left entirely too subtle and innocuous as if it were nothing. Even more glazed over is how he develops his new relationship with his nurse. We see these scenes setup, receive the key event and then rush over to the next before the first one can develop. There’s a certain cowardice in such direction that just doesn’t want to dig deep in the guts of the subject.

After viewing this picture, Stephen Hawking remarked how much he enjoyed seeing the movie. It’s easy enough to see why with one of the final scenes featuring Hawking and his ex-wife watching their approaching children from a distance. Hawking motions towards them and types into his text-to-speech computer “look what we made.” It’s a favorable love letter to the man of science, but cleaned and polished up for an audience to receive just the headlines and just the tears. The harder truths and far more interesting scenes are lost between the cracks of a mostly celebratory piece.