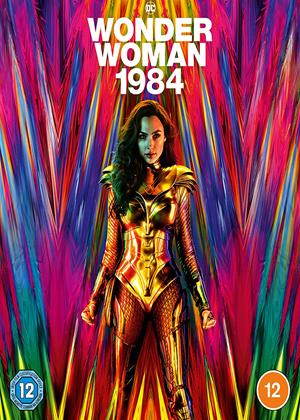 With the DCEU in a current state of transition, Wonder Woman is placed in an odd spot with its sequel, existing between the events of World War I (Wonder Woman) and 2017 (Justice League). But, you know, continuity be damned. I don’t really care how well Diana’s century-long crush on Steve Trevor holds up or if somehow the entire world forgot about Wonder Woman after such a devastating event of trying to save the world. I’m willing to go along with the theme of Wonder Woman trying to conquer greed in the 1980s. It’s a concept that almost works if it had the guts be a bit more than just a lighter superhero affair.

Gal Gadot reprises the Amazon of Diana Prince, trying to live a life among men after the events of the first film. Now in 1984, she works as an archeologist in Washington, where she seems to enjoy her work. She’s still pining for her lost love of Steve Trevor (Chris Pine) and wishes more than anything that he would come back from the dead. Her discovery of a mysterious wishing stone makes this wish come true but with a price to pay. The ultimate price is that Steve must inhabit someone else’s body and this is apparently of little concern to Diana that she is taking over someone else’s life for her own romance to continue. One has to wonder if the more insidious nature of the stone wasn’t revealed by the villains if Diana wouldn’t renounce such a wish.

The villains who have evil intent for such a stone is one woman fed up with the world and one man who wants too much. The woman is Barbara (Kristen Wiig) who is tired of being unnoticed and devalued in her workplace as the stereotypical nerd girl. With frizzy hair and big glasses, she is ignored at the office and harassed outside of it. Through an unlikely wish, she becomes as strong as Wonder Woman and inexplicably becomes an anthropomorphic cheetah more out of comic book habit than general progression.

The more astute villain of stone’s true power is Max Lord (Pedro Pascal), a struggling industrialist with his oil company about to go under. Knowing enough of the logic behind the stone, Lord adopts the ability to grant wishes at the cost of his health. He doesn’t seem as knowing of the Monkey Paw logic behind the wishes but that’s mostly because this Wishmaster style logic loses its place as the film favors more on the thematic elements of grotesque greed. It’s up to Diana to convince Max that he doesn’t need everything and that everyone else doesn’t want their more cynical wishes to come true.

On a surface level, Wonder Woman 1984 returns a bit more heroism to the DCEU. After suffering through weary brooding and excessive violence in previous entries, here is a hero that saves kids and opts not to kill when within her power. This aspect may inspire comparison to that of Richard Donner’s Superman from the start of not trying to take itself too seriously but also better prove the hero aspect of the character worth rooting for. But as the film progresses, it quickly mutates into Superman III, favoring greater thematic elements that become lost in the muck of the theatrics.

Where the film becomes most problematic is how Max is staged in bringing out the worst in humanity by merely asking them leading questions about their fondest desires. Max’s credo is “Life is good, but it can be better.” There’s an off assumption from his intentions that life was already good and that desiring a change is detrimental. This is certainly not the intent but that’s only by avoiding the pitfalls of such a premise. It’s convenient for the narrative that 90% of the wishes made are more about greed and not about something less selfish. It’s understandable to this degree why the film never favors too much of its 1980s elements. Wishes of nuclear disarmament and curing AIDS are out of the equations since that would have to be a tougher sacrifice when Wonder Woman tries to convince the world that the wishes are bad and must be renounced.

Wonder Woman 1984 does manage to avoid being deeply flawed at its core from the prior DCEU entries which were either mired in decaying philosophies or just simply a mess of a premise. Not even Zack Snyder’s producing credits can fully ruin this picture. That being said, the film still feels bloated and unfocused for being so long and never fully embracing the romantic chemistry of Diana and Steve or the bitter greed of Barbara and Max. As a result, WW84 remains more of a standard superhero affair that presents some pleasing action sequences but hasn’t fully throughout its thematic resonance, careening towards a climax that goes too light for a topic more complex.