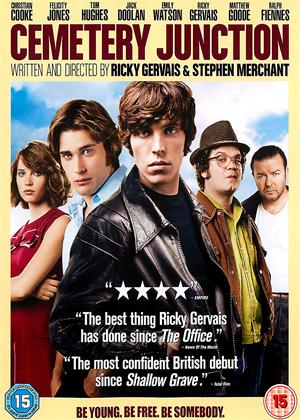 Synopsis:
The 1970s had arrived. Times were changing. Reading wasn't. From Ricky Gervais and Stephen Merchant comes a hilarious aid heartwarming new comedy about three friends who dream of breaking free from the mundane world of Cemetery Junction. Knowing that they can't spend the rest of their lives drinking, fighting and joking around, they're forced to make a choice. Nothing is quite as simple as it should be though, especially when one of them falls for his boss's daughter, only to find that she is already engaged to be married. To get what they want they'll need to break the rules, whatever the cost.
Actors:
Christian Cooke, Felicity Jones, Tom Hughes, Ricky Gervais, Ralph Fiennes, Matthew Goode, Jack Doolan, Steve Speirs, Jessica Jones, Madeleine Dunbar, Andrew Brooke, Burn Gorman, Anne Reid, Julia Davis, Albert Welling, Katy Murphy, Francis Magee, David Earl, Bryony Hannah, Terence Bird
Directors:
Ricky Gervais, Stephen Merchant
Writers:
Ricky Gervais, Stephen Merchant
Studio:
Sony
Genres:
Comedy, Drama, Romance

I really enjoyed this. It's a light, nostalgic, semi-autobiographical film by Ricky Gervais and Stephen Merchant - but it's nothing like The Office (thank goodness!). There are some lovely scenes - I liked Gervais as the father and the racist grandmother! And, despite being too young for the 70s, I loved the music! Sure, some was from the 80s in a 70s movie - but a little poestic licence is fine. All in all, this is way funnier than most Hollywood comedies. Not perfect or spectacularly funny, but well worth renting.

not up to scratch - Cemetery Junction review by CP Customer

This film never really got going. The ending was a dissapointment and the whole thing seemed a bit pointless. A few laughs but not enough.

If your a fan of the Gervais/Merchant writing partnership,you will not be disappointed.

How this film did not do more at the box office,is beyond me.

A tale of working class people,trying to move on,and all the trials and tribulations that entails.

If your a fan of Richard Curtis films,or decent British comedy in general,you'll love this.

Didn't know much about this film when I rented it but I was not let down at all by it. Very funny throughout yet moving also. Captures the 1970's life by factory workers very well and can see the desperation from some for a better life. I was quite tired when I started watching this film but by the end I was wide awake and had many conversations about it after. 5 out of 5

This combined a really good period drama based in the 70's with a warm, British gentle humour. The 70's were accurately portrayed and the humour neither hammed up nor too gentle, some laugh out loud but mainly subtle. For example an old man given a cut glass bowl for 24 years of crushingly dull service sits glumly by it, midway between regret, and anger at underachieving when a yob flicks his cigarette ash into it. The faintest of reactions midway between anger and resignation. The sort of comedy that wouldn't sell in Hollywood.

Disappointing but oh so British - Cemetery Junction review by AB

A typical British film with subtle humour, nostalgia and quaint observations about the rut that a lot of people find themselves in. A lot of people will nod their head in agreement with the background storyline about the futility of life, especially as seen from restrospective point of view from us 'grown-ups', whereas these characters at least have the gumption to do something about their situations.

I must disagree with the review that publicises this film; "hilarious" it is not - depressing, yes; funny - no; amusing, quaint, quintessentially British - yes