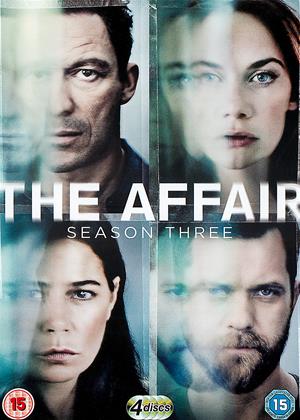 Reviews of The Affair: Series 3

The Affair: Series 3 follows in the footsteps of what made the previous installments famous: sex, mockery revolving around sex, and drama through the notion of, you guessed it – sex. So if you’re of the squishy sort that rejects all notions of reproduction and extra-marital relationships, then you’d be better off without seeing this one. If on the contraire, you happen to love fantasizing about an ensemble of actors reproducing love triangles, friendship backstabs, and the morality of love – then you’d be in for a treat.

The show follows Dominic West as Noah and Ruth Wilson as Alison, two people who, amidst a monotonous and a boringly steady marriage, were subjected to a newfound passion for venturing outside the known and exploring their sexual desires deeper than they’d ever hoped for. However, while the first season managed to strike a perfectly formal balance between the focal points of the two in question, this one abandons that notion (to some extent) to bring to the audience the moral trials of none other than Noah. This is understandable as it is relatable, since the constant going back and forth can detract certain demographics from thoroughly enjoying the show (as was the case with Lost). What I’m trying to say is that The Affair: Series 3 comes full circle to Noah period.

In fact, the show abandons the flashback structure in favour of a more traditional approach that, for some reason, works better than a scrambled narrative as was the case with the first two seasons in particular. No longer is the audience lingering in a place of constant unknowingness pertaining to the murder of Alison’s brother-in-law Scotty Lockhart. Instead, we know precisely who did it (or at least it confessed it did) and that person is now fresh out of repentance trying to integrate his notion of self back into society to the best of his abilities and craft.

And that person is [SPOILER ALERT] Noah. Not everything is bleak for him however, since he meets with Juliette (played by Irene Jacob), a French professor with whom he immediately clicks. What’s more, Noah tries to hide the notion that jail is no fun, but to no avail. His time spent behind bars is made that much worse by Gunther (Brendan Fraser), a guard whose real-life physiological changes (Fraser) makes him that much unrecognizable and scary (uncanny valley comes to mind).

Finally, The Affair: Series 3 is intriguing, interesting, and even mind-blowing at times, which makes up the majority of what this series is all about. Again, if you’re into all of that stuff, then go ahead and watch this piece of brazen drama and share how you felt afterwards (hint: it won’t be pleasant).