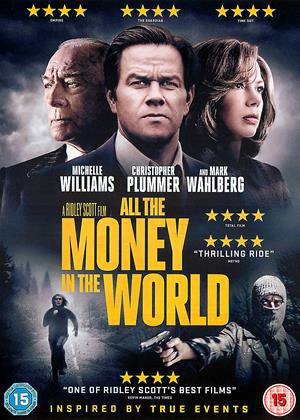 Reviews (16) of All the Money in the World

Semi-fictional 'true' story, sadly without the great Kevin Spacey (much missed) - All the Money in the World review by PV

This is an interesting watch, as usual professionally-executed by the now 80 year old Ridley Scott.

BUT I have 2 gripes:

1) Much of this is fiction, particularly the ending. NO SPOILERS but I remember watching a TV documentary about Mr Getty in the late 1970s - shocking as he was so rich but so mean, alone in a big house, eating alone. I remember it. So when did he die?

2) I think it is just plain wrong that Kevin Spacey was 'vanished' from this movie in such a Stalinist manner. He has been accused of minor indiscretions when drunk by certain persons no doubt keen to sell their stories. He has not even been arrested or charged. And yet so cowardly are the Hollywood mob that they throw him to the lions, for fear of being tainted themselves.

Plummer is OK; but Kevin Spacey would have added more dimensions to the character. And EVEN IF he did wrong in real life, so what? Are we to vanish all writers, artists etc from view who have done wrong? If so, the bookshelves and galleries would be half empty. And didn't Elvis date a 14 year old? Shall we ban his records now and delete him from history? THAT is what I mean. Think about it. Separate the man and the work - as DH Lawrence wrote - no matter now many metoo boowho whingers scream and yell for their own egomaniac, attention-seeking, infantile, victimhood-craving, compo-chasing purposes (my words).

Sadly in these pc gestapo times it seems this sort of USSR/Nazi vanishing of undesirables will continue, as we are forced to suffer tedious movies full of female and black characters to tick the diversity metoo boohoo boxes. That is why I hardly ever visit the cinema these days. I watch TV dramas dominated by white men like Breaking Bad which you'll never see in a movie now, as half the characters have to be female and black according to a decree demanded by the diversity gestapo.

4 stars. I esp liked the visuals here, esp of Hadrian's Villa near Rome which I have visited.

7 out of 18 members found this review helpful.

Money = goes to pot. - All the Money in the World review by NC

Money corrupts. Certainly when see what happened to a lot of the Getty family, it did. The son went to pot literally, and heroin etc.

Remember when lad was reported with ear cut off. Lived very near Sutton Place when Getty in residence, and did have a local rep as a skinflint.

Plummer stepped into the breach, but Kev would have made it his for sure. Shame we probably never see Spacey again, wonder if Dustin will escape the drum beaters?

Big surprise that the most self indulgent industry in the world has odd folks taking advantage of position and money. Plenty of wanabe stars willing to comply to get ahead. Will not repeat here how Madonna said she made the big time..............

Back to film. Is OK.

So, most people will know about the original lead, Kevin Spacey, being replaced after his immersion in sex abuse accusations, but many will not know the story of the kidnapping of Getty's grandchild. This film dramatises the events surrounding this incident, reminds engaging throughout, builds tension effectively as the narrative progresses, and is excellently acted by all. We really enjoyed this film - an unexpected (to us) hit.

This is a real 'settle down for the evening' movie. Even though you know the story it is still very entertaining. Christopher Plummer is brilliant,no wonder he got the Oscar nomination. It makes you glad not to be a Getty!

MR. PLUMMER AT HIS BEST. - All the Money in the World review by DT

Okay BUT I have a gripe about blatant racists... - All the Money in the World review by MG

The film was okay but was moved to post due to the review from PV. Wow, what a racist. PC Gestapo?! What hyperbole. Only watch shows with white leads? Oh. My. God. Missing out then you racist.

Oh and Spacey isn't guilty yet but come on, too many stories out there to just brush it all under the carpet.

Cinema Paradiso, please send out a warning to this poster. Surely you don't tolerate such views? This isn't a matter of free speech either as I'm sure you have rules and guidelines which apply to customer reviews. We can't swear for one.

Sorry, I'm not normally like this but that PV person is clearly racist, misogynistic and shouldn't be allowed to post such comments without any repercussions!

An unpleasant film. Hard to watch, I did fast forward some of the bits especially the ear bit.

I’m not sure what there is to like. It’s quite chilly, a hard watch and very harrowing. Not one to see twice. I think most people could do without seeing this, it’s not really thought provoking, or interesting or breaking new ground. And no suprises.

A bit too long and drawn out. Could have been slimmed down.

fantastic film - All the Money in the World review by OP

Really fantastic story based on the Getty kidnapping. The reviews have been side tracked due to the Spacey issue, but actually Christopher Plummer is brilliant in the role - and all the other acting/characters are superb. This film had me on the edge of the chair and it didn't matter at all that I half remembered what happened from the 1970's. The locations are great and its well worth watching.

Revealing - All the Money in the World review by HM

I didn't know the kidnap was this involved, an eye opener. The story is told in a way that reveals the personality of Getty senior as much as it deals with the kidnapping. I found it absorbing and shocking on a number of levels. It is exiting, emotional and challenging; definitely a thought provoker.

It is a movie for those that like drama and insight into the human condition and what makes a top performer tick as well as the effect such an extreme personality can have on siblings. Superb. Plummer is magnificent and for me, a better bit of casting than Spacey regardless of the circumstances of his sacking.

You may want to watch the Alan Whicker interview on BBC I-player with Getty from 1963 as his poker faced personality is on display for all to see: https://www.bbc.co.uk/programmes/p00nw1t5

Say what you will of Ridley Scott but his ability to shoot film is impressive. He pulled off his greatest feat with All The Money In The World, a real-life thriller that was to star Kevin Spacey as the elderly John Paul Getty. But when the controversy broke out over Spacey’s indecency, Scott decided to do what seemed like the impossible; recast Spacey’s part with Christopher Plummer, reshoot all of Spacey’s scenes and still make the deadline of hitting theaters in only a few weeks. Considering how much was reshot and how well Plummer owns this role, it’s an astounding stunt of how quickly Scott can turn out greatness.

The Getty family is established one of wealth and pride. John Paul Getty had built himself up as the most established of oil tycoons, able to afford a comfortable life for his family and purchase incredibly expensive paintings. He’s also very frugal as a classic miser, desiring to do his own laundry in his lavish estate as opposed to hiring someone to do it for him. So when he discovers that his teenage grandson, John Paul Getty III (Charlie Plummer), has been kidnapped by an Italian crime ring, he’s not exactly keen to shell out the $17 million being asked for in the ransom.

Frustrated with J’s refusal to pay is John’s mother Gail Harris (Michelle Williams), who had originally divorced John Paul II (Andrew Buchan) for his drug problem. She doesn’t have the money to pay, having reject alimony. And J is certainly not going to help her monetarily if he has to, considering that anyone could kidnap a Getty and make a mint if they tried. It doesn’t help that he also views his blood as property, treating his grandson with the same wealth and impersonal desire of a fancy product on auction.

What J is willing to spend money on is his associate of an oil negotiator, Fletcher Chace (Mark Wahlberg). Fletcher previously worked for the CIA so he has a bit of an idea on how to handle this situation as the criminals get antsy and the media swarms around the family. Fletcher tries to keep thing professional but the more he takes an emotional interest in Gail, the more vicious he feels towards the uncaring old Getty.

The tensions are ramped high not just with the Getty family feuding over finances. The grandsons kidnappers are unstable and disorganized. When one fearful gang member accidentally shows his face to the grandson, the gang takes precautions and disposes of the exposed criminals, leaving behind a burnt corpse. The criminal ring taking in the grandson goes the extra mile to show they mean business by slicing off a body part and mailing it to grandpa Getty. Realizing nobody will come for him, the grandson will have to find his own way out or rely on the humanity of others to see how inhuman this hostage situation has become.

The film could have either been entirely about the Getty negotiations or the third Getty generation escaping his kidnappers. Presenting them both with an equal balance of screen time makes the film all the more stirring and encompassing. More than just the messiness of the situation, the movie boasts real character dynamics and conflicted outlooks, as when the eldest Getty slowly comes to realization of the error in his ways, mounting with each day he refuses payment. If not a brilliant film by Scott’s standards, it’s another fantastic showcase of Christopher Plummer’s acting that has aged as the finest of wine.