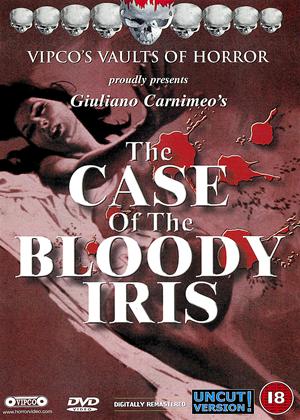 Rent other films like The Case of the Bloody Iris

Reviews (2) of The Case of the Bloody Iris

Spoilers follow ... - The Case of the Bloody Iris review by NP

The music of the magnificent Bruno Nicolai ushers us into a busy street scene in which young blond is travelling across town to meet a friend. An elevator. A gloved figure dressed in black. A knife. A spattering of bright blood. And we’re off …

Lots of scantily clad girls. A camp photographer. Edwige Fenech. An audience of men politely denying a challenge from a dominating model Mizar (Carla Brait): “Let’s you and I do it.” She’s issuing a challenge for a 3-minute wrestling match, of course, and naturally, she wipes the floor with any who accept her challenge. She is not quite so successful when pitted against the mysterious murderer, however …

Fenech plays Jennifer Lansbury, estranged wife of aggressive swinger Adam, who demands she returns to him and his polygamous lifestyle. Too obvious to be the killer, attention then turns to Lansbury, who is used as bait to trap the killer by Commissioner Enci (Giampiero Albertini).

There are some effective set-pieces, my favourite of which is the demise of playful scamp Marilyn (Paola Quattrini) in the middle of a bustling street. As she clutches at the blood gushing out of her stomach, no-one appears to take any notice, or are too busy to care, before she collapses in the arms of handsome Andrea (George Hilton) – who becomes yet another suspect.

There’s an elderly eccentric (and horror comic addict!) who is discovered to be hiding her deformed son David. Naturally, being scarred, he is also a sex fiend (!) with designs on Lansbury. Could he be a further possible felon?

Whoever the murderer is, and I’m not telling, Fenech is the star and quite rightly her character is central throughout (Producer Luciano Martino and Fenech were an item at the time). She is not only a sublime actress that oozes a genuine charisma, but alongside Rosalba Neri, I would say she is one of the faces of giallo. When the tension is ratcheted up toward the end, there’s genuine concern for her. My favourite giallo featuring Fenech continues to be ‘The Strange Vice of Mrs Wardh (1971)’, but ‘The Case of the Bloody Iris’ occasionally approaches a similar standard.

Tacky effects, casual nudity and a dire plot.....need I say more? Worse than bad, I wish I hadn't bothered with this one. I very nearly stopped the disc before the end because I had guessed who the killer was way before the end and to be frank couldn't be bothered really if I was right or wrong. Guess I only watched in the vague hope it would actually get better before the end...it didn't.