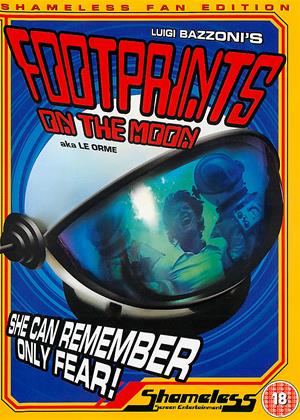 Reviews (1) of Footprints on the Moon

Intriguing, but Kinski is wasted - mild spoilers follow. - Footprints on the Moon review by NP

I was first moved to watch this because it been described as a giallo in several articles, and stars the fearsome Klaus Kinski. I came away from it deciding it is definitely not a giallo, and that Kinski’s involvement was far too brief.

There’s no black gloved killer, no nudity, no gore and no rousing soundtrack. What was interesting to me that I spotted that heroine Alice’s short hairstyle was in fact a wig (the join was given away in a close-up early on), and her longer hair – a wig in the film – seems actually to be actress Florinda Bolkan’s real hair.

That moment of self-congratulation aside, I found this to be an intriguing, rather artily-shot thriller. Luckily the moon shots are brief in total, leaving us more time to enjoy the elegant architecture and beautifully shot (this was director Luigi Bazzoni’s last film) locations in Rome and Turkey. In her bid to reclaim her memory, Alice runs into a little girl with piercing eyes, who looked familiar to me. Turns out little Nicoletta Elmi had also starred in ‘A Bay of Blood’, ‘Who Saw her Die?’, ‘Flesh for Frankenstein’ and ‘Deep Red’ (among others) by this time – not a bad resume for an 11 year old.

As for everything else, the occasionally muggy story is undoubtedly lifted by the acting. Bolkan is extremely good, and she is good company. Peter McEnery as Henry is also very good, never quite letting us fully believe in him as either a hero or villain.