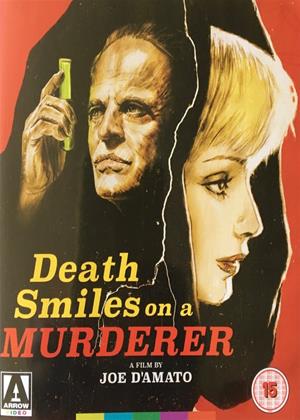 Rent other films like Death Smiles on a Murderer

Sign up
The Forbidden Photos of a Lady Above Suspicion

Sign up
The Iguana with the Tongue of Fire

Reviews (1) of Death Smiles on a Murderer

Through the rolling, autumnal, Hammer-esque woodlands, an accident with a horse and carriage throws Greta (Ewa Aulin) into the care of Eva (Angela Bo) and Walter (Sergio Doria). The couple are so good natured, it seems increasingly apparent something other than being cordial is on their agenda. Meanwhile, Klaus Kinski at his most urbane and creepiness, plays Dr. Sturges, who has dreams of bringing the dead back to life. In a move typical of the unpredictability of this film, his character seems set to be a main player, yet isn’t around as long as we expect. Luciano Rossi, a familiar face to giallo fans, here plays Franz, who we first see grimly lamenting the death of his sister.

This love-letter to Edgar Allan Poe is a restrained and well directed offering from exploitation guru Joe D'Amato (credited as Aristide Massaccesi). I say restrained not because it lacks in atmosphere – far from it – but is far more stylish and sophisticated than he is often given credit for.

There are some terrific performances here (Aulin is excellent throughout, striking a balance between cute-as-a-button and terrifying.) but for me, the standout contribution comes from Berto Pisano and his stunning incidental music. His score is by turns echoic, dreamlike, romantic and sinister and ultimately one of the best giallo soundtracks I have heard. Stunning. The balance between music and the sumptuous locations is irresistible.

The only problem I have with this is the way the story is told. It all seems to cohere, but is choppy in its set-pieces which makes the narrative somewhat murky: at times it is difficult to know quite what is going on. As Dr. von Ravensbrück (Giacomo Rossi Stuart) ruminates, “Something just doesn’t add up”. It might well be that this could be quite deliberate, adding to D’Amato’s richly filmed dreamy atmosphere.

There are echoes of Mary Shelley and Edgar Allen Poe, but the results are really quite unique. I thoroughly enjoyed this. It should be more widely known. 8 out of 10.