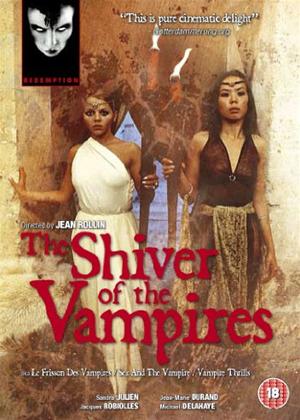 Rent other films like The Shiver of the Vampires

Reviews (1) of The Shiver of the Vampires

Spoilers follow ... - The Shiver of the Vampires review by NP

One of the many enjoyable things about the horror genre is the continual ability to surprise. I recently watched Blood for Irina (reviewed earlier), and read that it could be seen as Rollin-esque. This in turn lead me to take a look at a few films by French director Jean Rollin, who appeared to specialise in very stylistic, low-budget vampire films, beginning with the provocatively titled Le Viol du Vampire/Rape of the Vampire (1968).

Of all the few Rollin films I have seen (and I intend to see more), Le Frisson des Vampires/Shiver of the Vampire (his third) might be my favourite.

As one of the two serving girls, once again, is Marie Pierre Castel. Marie featured in a number of Rollin films, sometimes alongside her sister Catherine. Both girls are striking to look at, quite ethereal in fact, and here Marie is her usual rarely-speaking, somnambulistic subordinate who for once, appears to have a happy ending. Marie’s final Rollin role was in La Fiancee de Dracula/The Fiancee of Dracula (2002). Though not often required to do a great deal other than look alien, the Castels are mesmerising performers.

Here, the locations are truly stunning and deathly creepy. Huge castles and lush forestry, together with a freezing beach – another Rollin staple – often belie the sometimes stilted acting, especially from the two hippy/vampires.

Rarely, this film is afforded an actual ending. Often in the Rollin films I have seen, they end very suddenly, possibly as a result of his lack of budget or time constraints. No so here. There is a very final moment – which nevertheless invites the viewer to check out more of his work. Certainly, this is one of his most accessible, although no kind of compromise to ‘normal’ film-making in any way.